How the Mercosur deal’s ethanol boost contradicts EU green promises
16-Nov-2021 Euractiv
While the EU maintains that ethanol has a role to play in Europe’s shift to clean transport, the production of ethanol is damaging the environment and hurting local communities in South America.
New-gen issues in India’s line of sight as it eyes trade deals
16-Nov-2021 Business Standard
As India goes into firming up trade deals with developed nations like Australia, the UK and the regional bloc, and the EU, it will have to be well prepared to negotiate on new-generation issues, such as data protection regulation, e-commerce, and environment.
The EU’s path to trade sustainability
15-Oct-2021 Euractiv
As public support for EU free trade deals is waning, civil society groups are hoping to help tighten the bloc’s standards on trade sustainability as part of an ongoing consultation.
UK trade deals should prioritise economic growth over environmental protections - leaked govt document
15-Oct-2021 Sky
The document says it can be very difficult to trade with some countries that do not necessarily support saving the environment but the government says ministers are not considering the advice. The false hopes and empty promises of investment treaty modernization
13-Oct-2021 The Monitor
A Canadian company’s successful challenge to a precautionary mining ban in Colombia shows how little investor–state dispute panels care about the right to regulate. Why a hasty trade deal may not be good for us – or for the environment
26-Aug-2021 Friends of the Earth
What precedent might be set by the new Australia trade deal and what could it tell us about the future for UK environmental standards?
Deep-sea salvage firm uses NAFTA to fight Mexican environmental rules
9-Aug-2021 The Maritime Executive
A lawsuit filed against the Mexican government for denying a permit for seabed mining has put a spotlight on the lack of international rules for such practices.
Protecting human and environmental rights in international investment agreements
9-Aug-2021 East Asia Forum
Human rights experts are particularly concerned about the asymmetric nature of the system and a lack of investors’ human rights obligations. Together with high ISDS costs and arbitral awards, they undermine states’ ability to realise economic, social, cultural and environmental rights. Corporate courts vs the environment
3-Aug-2021 Al Jazeera
Corporate courts were invented to protect the West’s control of the world against decolonisation. They are now undermining attempts to halt climate change.
Brexit: Australia trade deal may lead to deal with South America, where intensive farming destroys rainforests
2-Aug-2021 The Independent
‘Any policy allowing imports that do not match UK animal welfare policies simply props up an industry the public has firmly rejected,’ says critic.
Ancient Romanian gold mine given UNESCO protection
28-Jul-2021 Balkan Insight
The derailment of the plans led Canadian mining company Gabriel Resources to sue the Romanian government for $5.7 billion before the Washington-based ICSID.
Romania mining town Rosia Montana eyes UNESCO restart
23-Jul-2021 France 24
Meanwhile, Gabriel Resources has taken Romania before the World Bank’s International Centre for Settlement of Investment Disputes, seeking $4.4 billion (3.7 billion euros) in damages.
Ecuador to seek ’payment plan’ for award to French oil company
3-Jun-2021 Reuters
Ecuador has 60 days to make the payment and has already contacted Perenco to start negotiations. In 2020, the country inked a $6.5 billion emergency deal with the IMF.
Ecuadorean state should pay $412 million to Perenco after losing legal dispute
2-Jun-2021 Amico Hoops
The Ecuadorean country will have to face a millionaire sum for Perenco oil company after a ruling by a panel formed under the auspices of the World Bank’s International Center for Settlement of Investment Disputes.
US, Canada, Mexico hold ’robust’ trade deal talks, downplay differences
19-May-2021 Reuters
Trade ministers held "robust" talks on the new North American trade deal and pledged to fully enforce its higher standards, while downplaying differences over a range of other irritants.
Corporate courts threat to insects
18-May-2021 The Ecologist
The shadowy parallel court system of major trade agreements makes it difficult for countries to ban broad-spectrum insecticides. 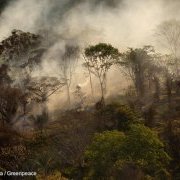 EU-Mercosur trade agreement: No protection of environment and people without renegotiations
3-May-2021 CIDSE
CIDSE, MISEREOR and Greenpeace published a new legal opinion that proves that in order to provide effective protection of human rights and environmental standards, the agreement needs to be renegotiated.
0 | 20 | 40 | 60 | 80 | 100 | 120 | 140 | 160 | ... | 500
Subscribe to bilaterals.org weekly