Germany approves law against some foreign investor actions
20-Aug-2008 IHT
The German government on Wednesday approved a law that would allow it to block moves by foreign investors to take large stakes in German companies, if it concludes that they endanger the country’s interests.
New curbs on investment from the South
14-Apr-2008 IPS
Germany’s decision to introduce controls on investments from the South in strategic domestic sectors is yet another indicator of growing protectionism in European and other industrialised countries against the neo-liberal globalisation they once masterminded.
EPAs will destroy African economies — German NGOs
29-Oct-2007
The economic partnership agreements (EPAs), proposed by the European Union (EU) to African, Caribbean and Pacific (ACP) countries, constitute a "neo-colonial instrument" which will destroy the economic and social basis in African states, according to some German non-governmental organisations. 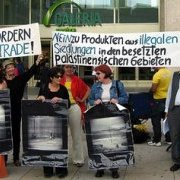 Berlin protesters demonstrate against Israeli products
19-Aug-2007 Haaretz
Protesters held signs reading "No to settlement products" and "Stop the Israel-EU Association Agreement."
WB junks Fraport’s Naia 3 claim
19-Aug-2007 PDI
The World Bank has dismissed the claim for compensation from the Philippine government over the Naia Terminal 3 project of Germany’s Frankfurt Airport Services Worldwide (Fraport)
Pak-German trade agreement mutually beneficial
14-Jun-2007
Federal Minister for Commerce, Humayun Akhtar Khan met with Dr Bernd Pfaffenbach, State Secretary of German Federal Ministry of Economy and Technology here today. During the meeting they exchanged views on bilateral trade and issues related to free trade agreement.
Germany supports Korea-EU free trade pact
6-Apr-2007 Korea Times
"We will most probably see a swifter resolution of the FTA talks, compared with the Korea-US FTA, since there are less sensitivity issues between the two sides," Jurgen Wohler, secretary general of the Korea-German Chamber of Commerce and Industry, said. He added that it would be satisfactory if the Korea-EU FTA is agreed upon on a similar level to the KORUS FTA.
Trinidad and Tobago to sign investment treaty with Germany
15-Feb-2006 Caribbean Net News
Last week, representatives from both governments met in Port of Spain to conclude the negotiations for a bilateral treaty for the encouragement and mutual promotion of investments.
OSG asks SC to reverse NAIA 3 ruling
5-Jan-2006
The Office of the Solicitor General (OSG) yesterday asked the Supreme Court to reconsider its decision allowing the government to take over Terminal 3 of the Ninoy Aquino International Airport (NAIA) only after payment of an initial P3.002 billion to the Philippine International Air Terminals Co. (PIATCO) representing the proffered value of the facilities.
Pakistan-US differences over BIT persists
24-Aug-2005 Dawn
Pakistan has asked the United States to sign the proposed Bilateral Investment Treaty (BIT) by dropping its demand that in case of an arbitration only the Washington based International Centre for Settlement of Disputes (ICSID) should be approached for a decision.
Bahrain-Germany to sign BIT
3-Mar-2005 Gulf Daily news
An agreement on the protection and promotion of investments between Bahrain and Germany is due to be signed "very soon". Germany is also pushing for a Free Trade Agreement (FTA) between the European Union and the GCC.
Germany’s Fraport flexes muscle
13-Feb-2005 Philippine Star
Fraport AG of Germany has decided to flex its diplomatic muscle in pressing for immediate compensation from the Philippine government for their investment in the Ninoy Aquino International Airport Passenger Terminal 3 (NAIA-3) project, under the 1997 Philippine-German bilateral investment treaty.
0 | 20 | 40 | 60 | 80 | 100 | 120
Subscribe to bilaterals.org weekly