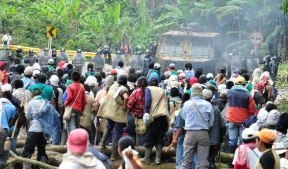 Colombia: Authorities suppress coverage of indigenous protests
24-Oct-2008 IFEX
At least one person was killed and more than 130 were wounded during indigenous demonstrations last week in several departments in Colombia. But with multiple press freedom violations being committed, you would be hard-pressed to find out what’s going on.
Audio: Indigenous march against free trade policies
24-Oct-2008 FSRN
In Colombia, thousands of indigenous people are staging a week long march. Marchers plan to march through 70 miles of Colombia’s countryside. They say they want to change economic policies that are impoverishing their nations. And they reject the presence of US corporations on their lands. Manuel Rueda joined the march as it passed through Colombia’s Cauca Province.
Global trade - Free for a wealthy few, costly for many
23-Oct-2008 Seattle Medium
I have seen first-hand the effects of “free trade” in several countries, and it is not the fairy tale that the mainstream politicians would have us believe. I have seen men, women and children working 20 hours a day in deplorable conditions to keep up with the influx of foreign goods. I have seen farmers who used to trade corn for clothes struggle because they do not have the cash to participate in the new “free” economy.
Talks on RP-EU cooperation deal to start next year
13-Oct-2008 BusinessWorld
The Philippines and the European Union have agreed to start formal talks in February for a political cooperation agreement (PCA) that will govern political and economic relations and lead to an EU-ASEAN free trade deal. Human rights, intellectual property rights and climate change will be among the areas covered by the agreement.
EU-Asean meeting to tackle trade barriers
11-Oct-2008 Business Mirror
The Philippines has expressed serious concerns on the proposed PCA because it requires commitment to sign the Rome Statute. Manila has not ratified the statute owing to concerns of military and police authorities they may face possible harassment suits from rights groups at the ICC.
Activists disrupt reception for Colombian Prez to protest free trade agreement
25-Sep-2008 indymedia
Two activists from TradeJustice New York City Metro disrupted a Council of the Americas-sponsored reception for Colombian President Alvaro Uribe Velez to denounce Uribe’s support for a free trade agreement between the US and Colombia that critics believe will exacerbate human rights and environmental catastrophes in the war-torn South American nation.
Free trade agreement: A campaign of deception
25-Sep-2008 Seattle Medium
The recent delegation of Colombians to Capitol Hill, some of whom were Afro-Colombian, advocating for the approval of the US-Colombia FTA, does not represent the view of the majority of Afro-Colombians living in urban and rural areas throughout the country.
Labor and the Colombia free trade agreement
21-Sep-2008 FPIF
The only way the Colombian deal will remain the first accord of its kind defeated in Washington, it’s clear, is if organized labor continues to play the central role in establishing the terms of debate around basic human rights and keeping Democratic members of Congress in line.
Opinion of the Office of the Ombudsperson of Costa Rica on the Budapest Treaty
17-Sep-2008 Office of the Ombudsperson of Costa Rica
The Budapest Treaty on the International Recognition of the Deposit of Microorganisms for the purposes of patent procedure is not in line with the norms and ethical principles of Costa Rica. Civil society, the scientific community and the different congregations should have had a more broad discussion on this Treaty including its ethical, environmental, social, economic and legal implications. Unfortunately, this did not happen and the decision to vote the US-DR-CAFTA, with its obligation for Costa Rica to accede to the Budapest Treaty, at referendum was not taken with a generalized prior informed consent.
Maritime Union criticizes Myanmar connection in free trade deal
29-Aug-2008 Voxy
The Maritime Union of New Zealand says a free trade deal signed with ASEAN nations including the military dictatorship of Myanmar is bad for workers as it will boost the violently anti-worker regime in Myanmar and threatens workers rights.
Colombia as a Model for Latin America
12-Aug-2008 Dissident Voice
The US free trade agreement and the state and paramilitary violence in Colombia are part of the same project
Human rights, rule of law sticky issues in RP-EU pact
12-Aug-2008 Business Mirror
THE Philippines is seeking to settle sticky issues in the proposed partnership cooperation agreement (PCA) with the European Union which include government’s commitments to uphold human rights and rule of law in the country before the Asia Europe Meeting (Asem) Summit in Beijing in October this year.
Robert Gates joins PR offensive for Colombia FTA
24-Jul-2008 WW4 Report
US Defense Secretary Robert Gates and his Colombian counterpart Juan Manuel Santos share a joint op-ed in the New York Times shamelessly trading off the apparent hostage rescue operation to shill for the pending US-Colombia free trade agreement.
Palestine in the Middle East: Opposing neoliberalism and US power
16-Jul-2008 The Bullet
It is not merely the depth of suffering or length of exile that makes the Palestinian struggle an imperative of international solidarity in the current period. It is also the central location of the struggle within the broader context of global resistance to imperialism and neoliberalism. At the heart of this regional framework is the intrinsic relationship between the development of neoliberal capitalism in the Middle East and normalization of relations with Israel. All of the efforts of the US and their client regimes in the region are aimed at promoting these.
Final declaration of International Conference on Peasants’ Rights
26-Jun-2008 Via Campesina
We face patterns of violations of our rights, by the crimes committed by TNCs and by Free-Trade Agreements (FTAs). In order to address these patterns of violations, we need specific provisions and mechanisms to fully protect our rights. 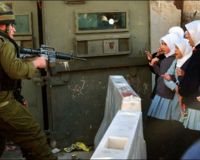 Petition: Suspend EU-Israel Association Agreement
26-Jun-2008 Petitionsite
Sign this petition which calls for an immediate suspension of the EU-Israel Association Agreement and any further trade between Israel and EU Member States in protest against Israel’s continued violation of human rights of the Palestinian people.
EU decision to upgrade relationship with Israel reveals Europe’s selective adherence to human rights standards
21-Jun-2008 AIC
Monday’s announcement for increased relations concerns three areas: diplomatic cooperation; Israel’s participation in European plans and agencies; and an examination of possible Israeli integration into the European Single Market.
Israel seeking an upgrading of its relations with the EU and to obtain "special status"
16-Jun-2008 AIC
On Monday June 16th, the EU-Israel Association Council will convene for the eighth time. For Israel the stakes are high.
Building its ties to Colombia: Canada’s imperial adventure in the Andes
15-Jun-2008 The Bullet
The United States and Canada have chosen to promote Colombia as an aggressive and heavily militarized bulwark against anti-imperialism in the region — an Israel of the Andes.
Obstacles to EU-Asean FTA
13-Jun-2008 The Nation
A free-trade agreement between the Association of Southeast Asian Nations and the European Union is unlikely to take shape soon because of the big discrepancies between Asean members and political problems in Burma, said Belgian Foreign Minister Karel De Gucht.
0 | ... | 200 | 220 | 240 | 260 | 280 | 300 | 320 | 340 | 360 | ... | 400
Subscribe to bilaterals.org weekly