EU urges India to offer more in bilateral trade talks
21-May-2008
The European Commission called on India on Tuesday to go further with its plans to open up its economy to European exports under a planned bilateral trade deal between the two trade powers.
EU gives cautious welcome to India’s free trade proposals
21-May-2008 Khaleej Times
India has delivered "useful" proposals for a free trade agreement with Europe but a lot of work remains to be done, a European Commission spokesman said Tuesday.
Govt asks EU to lift ‘paranoid’ health-related trade barriers
12-May-2008 Financial Express
In a move that may help negotiators to move ahead with the proposed India-European Union free-trade agreement (FTA), the Indian government has forwarded two significant suggestions to the EU to settle the wrangling on it’s health-related trade rules.
EU waiting for India’s submission of list on FTA
28-Apr-2008
The European Union is waiting for India to submit the list of items that will be covered under the proposed Free Trade Agreement between the two trading partners, a EU official said today. 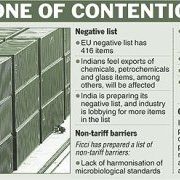 Free trade talks with EU lose pace
16-Mar-2008 Telegraph
India and the European Union (EU) will have to give the December deadline for their free trade agreement a miss if differences persist over the negative list and non-tariff barriers to trade.
EU won’t push India on FTA
4-Mar-2008
Brussels, March 3. The European Commission will not rush the talks with Delhi for a free-trade agreement even though India’s proposed FTA with Japan could happen sooner and affect the European Union member-countries’ presence in the Indian market.
EU-India FTA hits roadblock
4-Mar-2008 The Hindu
The prospects of free trade agreement between the European Union and India being wrapped up by the 2008-end deadline look very bleak with sharp differences having arisen over various issues — intellectual property rights, competition, agriculture, public procurement, market access and transparency.
Differences over negative list hold up India-EU trade pact
7-Feb-2008 Economic Times
India Inc’s eager wait for a comprehensive trade and investment agreement with the European Union could get a little longer as differences have cropped up over the items which would be kept off the pact.
Which India, Mr Brown?
22-Jan-2008 The Guardian
The EU’s stated aim is to use its planned free trade agreement to open up new Indian markets to European exports, especially in those areas which have traditionally been closed to foreign companies. India, which aims to win opportunities for its own exports, has asked that it be allowed some flexibility in opening up its domestic markets in order to protect the most vulnerable sectors of its economy. The EU has refused to grant India any such leeway.
Olive oil imports set to rise post India-EU FTA
14-Jan-2008 FE
The proposed India-EU free trade agreement may open doors for easy import of olive oil from Europe. Major olive oil exporting countries like Spain, Italy, and Greece are insisting upon India to reduce its duty, remove non-tariff barriers and other local taxes and levies and marketing restrictions like maximum retail price system that guarantee a 35% margin to the retailer.
0 | ... | 380 | 390 | 400 | 410 | 420 | 430 | 440 | 450 | 460 | ... | 470