520 items to get tariff shield under India-EU trade pact
3-Oct-2007 Times of India
India’s commerce department is on a drive to identify 520 items that would be shielded from tariff cuts planned under the proposed India-EU bilateral trade and investment agreement. Tariffs on all other items will have to be reduced to zero in 10 years from the date of implementation of the agreement. 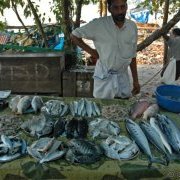 State’s favourite fish may escape duty-free import net
1-Oct-2007 The Hindu
Oil sardine and mackerel are likely to escape the list of duty-free import from Europe in the Indo-European Union trade and investment agreement, set to be signed late next year. The exemption is a major victory for fish workers.
New EU envoy for pushing trade pact with India
30-Sep-2007 Indian Muslims
Ahead of the India-European Union (EU) summit on Nov 30, Daniele Smadja, the new envoy of the European Commission, Friday called for pushing negotiations on a broad-based trade and investment agreement between the two sides.
India, EU to talk services agreement
26-Sep-2007 Economic Times
“For India, services is the most important aspect of the India-EU bilateral pact,” a commerce department official said.
Kerala to pressurise Centre on including fish in FTA
12-Sep-2007 New Kerala
The Kerala government is anxiously watching the move by the European Union to import 40 varieties of fish to India, as part of the proposed Indo-EU bilateral FTA, as it would adversely affect the state’s traditional fishing sector.
What will India gain from the FTA with the EU?
15-Jul-2007 New Europe
The negotiations for an EU-India FTA could prove even more difficult to bring to a successful conclusion than the Doha development negotiations.
Trade: EU policies ’predatory’
7-Jul-2007 IPS
The European Union’s trade policy has been condemned as "predatory" by a leading anti-poverty campaigner from India.
EU may not put human rights condition for FTA
6-Jul-2007
The European Union may back off from its insistence on including non-trade issues like human rights in the proposed free trade pact with India.
FTA with EU would get a boost from pally Portugal
3-Jul-2007
With Portugal taking presidency of the European Union on July 1, strong ties with India would help expedite the proposed free trade agreement between India and the EU.
India, EU start talks on FTA
29-Jun-2007
As part of its policy to push for Free Trade Agreements with major trading partners, India has formally launched negotiations with the European Union for an ambitious and comprehensive FTA aimed at removing barriers across all sectors including investment and services.
0 | ... | 380 | 390 | 400 | 410 | 420 | 430 | 440 | 450 | 460 | 470