Deals with Peru, Chile progressing
23-May-2011
The delayed free-trade area agreement between Thailand and Peru is likely to take effect in November, while an FTA with Chile should be concluded by mid-2012, says the Commerce Ministry.
FTA pact’s product list under attack
30-Nov-2010
The government is coming under increasing attack from activists for pushing ahead with EU-Thailand free trade agreement talks which include alcohol, tobacco and medicines.
Thai-Lao business blossoms
12-Sep-2010
The value of cross-border trade between Thailand and Laos is forecast to reach 80 billion baht at the end of this year, as the Thai government is pursuing a new strategy to optimise free trade agreements. 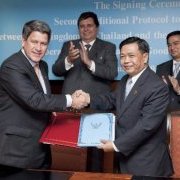 Thailand-Peru FTA could be sealed next month
23-Jul-2010 Andina
The Thai government will propose the Parliament to endorse a bilateral free trade area agreement with Peru next month in order to enhance the effectiveness of trade pacts this year, according to Thai Commerce Minister Porntiva Nakasai.
Thai cabinet approves draft of free trade agreement with Chile
12-May-2010 Dow Jones
The draft will be proposed for the approval of parliament before negotiations kick off.
China to replace US as Thailand’s main export market this year
5-Apr-2010 DPA
The surge in Thai exports to China is attributed to China’s strong economic growth and the implementation of the China-ASEAN free trade agreement on January 1
CP urges firms to tap low tariffs under trade pacts
12-Mar-2010 Bangkok Post
Thai entrepreneurs need to make the best use of tariff cuts under free trade agreements, says Charoen Pokphand Group, Thailand’s leading agricultural conglomerate.
FTAs to have minor impact
26-Jan-2010
Thailand will not gain much from free trade agreements because of minimal exports between the agreeing parties, says Sethaput Suthiwart-narueput, an executive vice-president of Siam Commercial Bank. 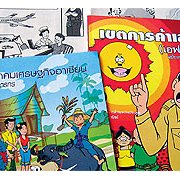 Government plans safeguards for farmers
27-Dec-2009 Bangkok Post
Thai authorities are taking precautions to shield businesses and farmers from the fall in farm product prices after tariffs are cut under the Asean Free Trade Area (Afta) at the start of 2010. 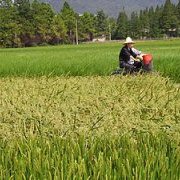