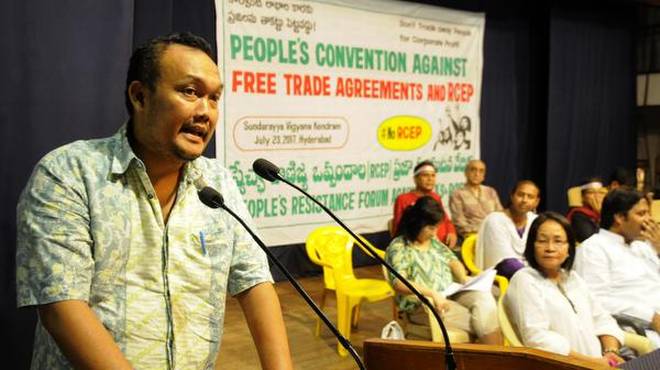 The 20th round of the Regional Comprehensive Economic Partnership (RCEP) negotiations is taking place from 17-28 October 2017 in Songdo, Korea. RCEP negotiations include chapters on goods, services, investment, intellectual property etc and the proposed provisions in these chapters affect the daily lives of the peoples of all sixteen countries involved in these negotiations including their access to knowledge and affordable life-saving medicines, farmers’ livelihoods, privacy, environmental protection and many other needed regulations.

The diverse communities who are affected by such an important negotiation need to know what is being proposed and have effective opportunities to express their views and concerns, and provide analysis and advice to the negotiators. Yet the RCEP negotiations take place behind closed doors, without releasing the negotiating texts, unlike at the World Trade Organization where many of the same issues are being negotiated (such as ecommerce rules, domestic regulation disciplines in services etc) and their negotiating proposals and consolidated texts are regularly released.

Six of you – Australia, Brunei Darussalam, Malaysia, New Zealand, Singapore and Vietnam – have already recognised the importance of stakeholder engagement during the Trans-Pacific Partnership Agreement negotiations by including a stakeholder process as part of the negotiating rounds that you hosted. These consultations were with chapter negotiators and allowed each stakeholder to speak long enough to provide in depth technical analysis about the provisions being negotiated, such as the improved wording of equivalent provisions in other trade agreements. This was possible because each stakeholder was allowed to give 15 minute presentations with Powerpoints to the relevant chapter negotiators.

We appreciate the RCEP civil society consultations held in the Perth, Auckland, Tangerang, Kobe, Manila and Hyderabad rounds. However, apart from in the Perth round, these consultations were with the Trade Negotiating Committee (TNC) and each civil society organisation could only speak for about three minutes. This limited the ability for civil society to provide analysis in enough depth, detail and technical specificity to be useful to negotiators.

We understand that commercial interests have been invited to share their views with you during previous RCEP rounds and have been given the opportunity to provide longer presentations to chapter specific negotiators.

We, therefore, call on you to allow civil society to speak for long enough with chapter negotiators in future RCEP rounds to be able to provide this in-depth analysis. In particular, in Incheon we would like to be able to meet with the intellectual property, investment, ecommerce, services and legal and institutional negotiators on 23 and 24 or 26 October 2017.

We also call on you to provide this effective opportunity for stakeholder interaction in all future rounds with advance notice of when and where they will be held, and release the working texts at the end of each round to allow a full assessment and informed debate to begin about the implications of RCEP, even at this late stage in the negotiations.