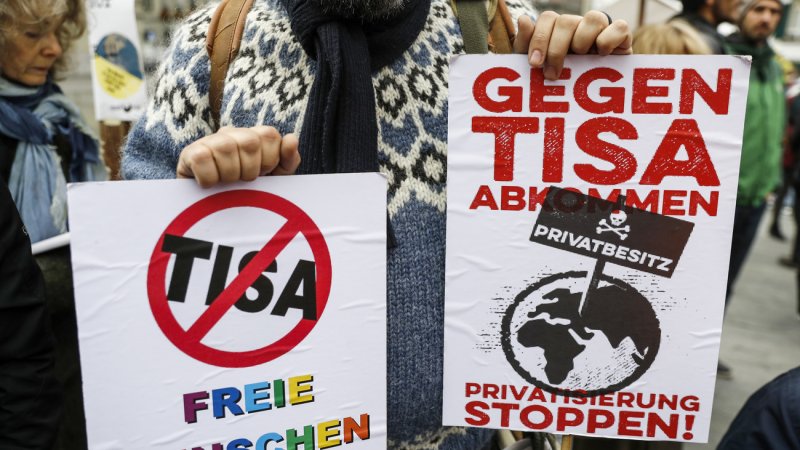 Better and more comprehensive transparency – these are core demands of civil society organizations in the debate surrounding free trade agreements. Yet, TiSA, along with CETA and TTIP, is an example of how free trade agreements are negotiated behind closed doors. Greenpeace is in possession of a negotiation text on transparency, dated September 14th 2016. According to negotiators, there appears to be a new (secret) text ready. Despite, this we want to publish this text from September, as it clearly shows the differences between the negotiating partners. We believe that the text can contribute to the public debate, along with the troublesome content that we expected to find in the final text as well.

The transparency proposed within the TiSA Agreement, which applies only to the parties but also to interested persons, is welcomed. However, given the secretive nature of the TiSA negotiations so far, Greenpeace concludes that th negotiations not only make a mockery of transparency, it abuses the very principle of transparency. Transparency in TiSA is asymmetrical in favoring large corporations that are financially strong and well established, while ordinary citizens lack opportunities and the access to actually make use of transparency. Transparency, as proposed in TiSA, allows for corporations to be informed early of planned measures and provided with opportunities for exerting their influence and alter or block new regulation. At the same time, opportunities for TiSA signatories to provide transparency on their own terms are restricted.

Similar regulations on transparency are also found in CETA, currently being voted on in the European Parliament. Generally it must be ensured that transparency in trade agreements also applies to civil society – not only on the paper but also in reality. There is a need for a new global trade system that is not based on exploitation but instead serves humanity, the international understanding and the environment. Greenpeace is calling for an abandonment of the old system as a first step in developing this new trade system. This means terminating all free trade agreements such as TiSA, CETA, TTIP and TPP and turning away from the failed neoliberal free trade paradigm that unilaterally favors the interests of multinational corporations and foreign investors.