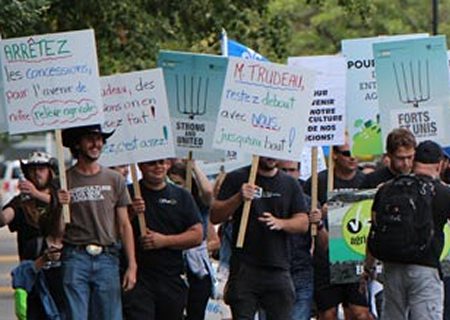 As if the USMCA dairy concessions were not bad enough…

By Cathy Holtslander, NFU Director of Research and Policy

Canadians are rightly concerned by the new North American trade deal’s concessions on Supply Management. Farmers are also very concerned about its attack on the integrity of Canada’s grain quality control system. Our government’s capitulation on these matters was no doubt encouraged by corporate lobbyists who had easy access to our negotiators. It is deeply concerning, though not surprising, that the proposed United States-Mexico-Canada Agreement (USMCA) has at least three chapters that formally entrench corporate influence on government decision-making. If USCMA comes into effect it will become even more difficult for elected governments in all three countries act responsibly in the public interest.

CHAPTER 26, COMPETITIVENESS, establishes a Committee on Competitiveness made up of government appointees from Canada, USA and Mexico (the Parties) to promote further economic integration among the Parties and enhance the competitiveness of North American exports. The Chapter outlines a series of aims, commitments and tasks designed to make North America an outward-facing free trade zone and trading bloc, and for all three countries to combat “market-distorting practices by non-Parties” that affect the region. The Committee will identify priority projects and policies to develop a modern physical and digital trade- and investment-related infrastructure, and improve the movement of goods and provision of services within the free trade area.

In Chapter 26 Canada agreed that the Committee on Competitiveness must give “interested persons” regular and timely opportunities to provide input on ways to enhance competitiveness. The USCMA defines “person” as a natural person or an enterprise. Thus, the USMCA gives corporations a permanent seat at the table as if their interests equate with national interests. Every year this Committee must report to the Free Trade Commission on its work and give advice and recommendations for further enhancing the competitiveness of the North American economy. The Commission oversees the USCMA and is empowered to consider amendments to the deal.

Chapter 26 hampers Canada’s economic sovereignty, making us extremely vulnerable to any punitive tariffs that might be used to “make America great again” which could be imposed due to the USA’s national security exemptions from the deal. It anchors, not only Canada’s economic interests, but our very infrastructure, firmly to the United States, preventing alternatives such as the diversification of our export markets or independent development of our own domestic economy.

Chapter 28, GOOD REGULATORY PRACTICES, promotes regulatory harmonization for the sake of increasing trade. It requires Parties to publish an annual report of their regulatory changes and estimated annual costs and benefits of the economically significant regulations adopted over past year, and notice of proposed regulatory changes for upcoming year.

Countries must provide notice and access to their domestic regulatory consultation processes and supporting data to “persons” in the other two countries. It also creates a mechanism for “persons” in the other USCMA countries to provide suggestions for change or repeal of existing regulations. These reporting requirements are not only onerous, but appear designed to ensure corporate lobbyists have advance notice and information that would help them influence new regulations.

Chapter 28 also establishes a Committee on Good Regulatory Practices made up of government appointees from each country, including top people from overarching regulatory bodies and key regulatory agencies, such as the Canadian Food Inspection Agency and our Pesticide Management Regulatory Agency. This Committee will promote regulatory compatibility and regulatory cooperation, with a view to facilitating trade between the Parties. The USMCA defines regulatory cooperation as “an effort between Parties to prevent, reduce, or eliminate unnecessary regulatory differences between jurisdictions to facilitate trade and promote economic growth, while maintaining or enhancing standards of public health and safety and environmental protection.”

Regulation is a critical function of government. The power to regulate flows from legislation passed by our elected representatives. Regulation creates the framework within which action is allowed. These limits are a matter of public concern, and should be set via legitimate democratic processes with the goal of protecting and enhancing the public interest according to the priorities of the population. Chapter 28 seeks to harmonize regulation among the three USCMA countries, even though the citizens that elect these governments have quite different constellations of histories, cultures, values and circumstances. Harmonizing regulation on the advice of interested “persons” for the sake of trade fundamentally attacks democracy by replacing the full range of considerations with narrow corporate financial interests.

In Chapter 34, FINAL PROVISIONS, we find a de facto sunset clause. During the NAFTA renegotiation process we heard that President Trump’s proposed 5-year sunset clause was rejected as a deal-breaker by both Mexico and Canada. But what ended up in the USCMA appears to be a convoluted six-year sunset clause. The Final Provisions chapter says the negotiated USCMA deal will last six years as is, then be re-evaluated. If all three countries agree, it would continue intact for other 16 years. However, if they don’t, the Free Trade Commission will hold annual joint reviews unless or until a new agreement is reached that all Parties are willing to accept for a further 16 years. Any Party can leave USMCA on six month’s written notice, leaving the other two in a bilateral agreement.

The joint reviews after year six appear to set up a process of continuous, piecemeal renegotiation. This is a recipe for constant pressure by corporate lobbyists — and American ambition — to erode both the economic and political sovereignty of all three countries without triggering public attention. After tying Canada and Mexico to the American economy under the Chapter 26 competitiveness measures and Chapter 28’s regulatory harmonization, both are vulnerable to intimidation if the USA decides to use the threat of withdrawing on six months’ notice.

If Canada ratifies the USMCA, it will not only strike a severe blow to our dairy and grain sectors, but will also sacrifice broad aspects of Canada’s democratic sovereignty.

Click here for the full text of the agreement