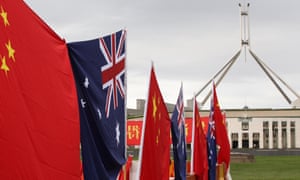 Australian businesses in China have praised a New Zealand trade deal which overcomes prohibitive red tape and any unofficial go-slow at Chinese ports that can plague Australian exporters.

The deal, announced earlier this week, shows China is moving ahead with trade deals with other countries as the Morrison government slowly works its way out of a diplomatic freeze.

Under the updated New Zealand free trade agreement fresh products will be processed through Chinese customs within six hours. Significantly, exporters will also be able to "self-declare" goods as being from New Zealand, rather than seek third-party certification.

“Free trade agreements are important and it is good to see a country like New Zealand negotiating an upgrade.”

But Birmingham said a regional trade deal could overcome such problems.

Asked whether Australia was falling behind while others such as New Zealand strike improved trade arrangements, Birmingham said Australia’s two-way trade with China was at record levels and growing across product categories.

“The China Australia free trade agreement remains one of the most ambitious agreements China has signed on to... and continues to create opportunities for Australian businesses," he said.

“That’s not to say that as time goes by we won’t seek to seize opportunities to improve upon it.”

Some Australian exporters to China have struggled with licensing issues, including milk powder company Bellamy’s and beef exporters.

He said that in the absence of an updated deal, the Regional Comprehensive Economic Partnership (RCEP) that Australia and China are hoping to sign, among 13 ASEAN countries and partner nations, offers the best solution to “non tariff barriers”.

“It’s the additionality of undertakings between parties that provides one of the key benefits, especially in terms of bilateral cooperation,” he said, referring to RCEP.

While attending the China International Import Expo on Wednesday, Birmingham visited the Australian pavilion where 200 Australian companies are represented.

On Tuesday, he attended at World Trade Organisation meeting with Chinese commerce minister Zhong Shan and vice minister Wang Shouwen, who had worked with Australia on the RCEP agreement in Bangkok at the weekend.

Zhong had recognised that business relations with Australia are “incredibly strong”, Birmingham said.

French President Emmanuel Macron dined and drank wine with Chinese President Xi Jinping in Shanghai, and pledged joint action on climate, while pushing for an investment deal between the EU and China.

"I think there was [sic] inconsistencies with the different ports, this will hopefully bring some consistency and especially if you are moving fresh produce, these shorter timelines are really important", he was quoted as saying.