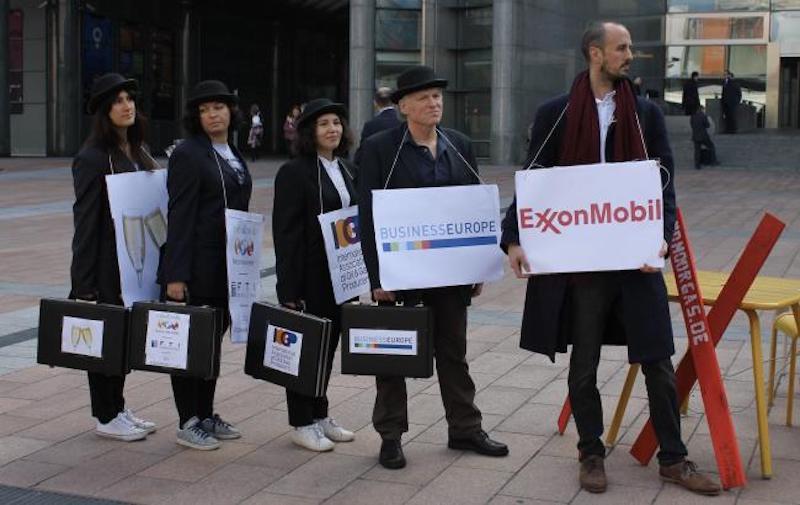 Lora Verheecke is a researcher, specialising in trade and lobbying. She worked for the Brussels-based NGOs Corporate Europe Observatory and Friends of the Earth Europe.

bilaterals.org : What does a lobbyist do in Brussels on a typical day ?

Lora Verheecke : There are two sides to being a lobbyist. The first one is to be always informed about what is going on with the issues they work on. For example, a lobbyist for Coca-Cola must know all the draft regulations that could have an impact on the interests and profits of Coca-Cola. That’s part of the job, so you have to read European newspapers, like Politico, every day, you have to get information from parliamentary assistants (the people who help with the legislative work of the MEPs) and people who work at the European Union (EU) institutions, to know the status of some bills. To give a concrete example : let’s imagine a new directive on plastics. The lobbyist has to check who is writing the bill, what is included in the bill and see whether or not there will be an impact on Coca-Cola. Basically the lobbyist has to monitor the legislative process.

The other side of the job is more on the offense and intervention. Coca-Cola calls this "fight back". If a bill is close to becoming a law, and it is going to have a negative impact on Coca-Cola, the lobbyist must do everything possible to ensure that either the bill is abandoned or it does not harm the company. Coca-Cola might finance studies that would conclude that such a law would, for example, lead to a loss of jobs, or launch a communication campaign with journalists or influencers to explain why this law is bad. The lobbyist will go to the European Commission or other institutions, such as the Council or the Parliament, to argue against this bill. The whole lobbying machine is set in motion to do away with the bill.

Do lobbyists have more proactive strategies ? For example, do they push for the implementation of laws that would be in the interest of a company they represent ?

It is very rare for a company to ask for a new regulation. For example, the message from BusinessEurope (the lobby of big corporations in Europe) is to stop enacting new laws. In fact, there is a European program called "better regulation", whose goal is to remove an older law every time a new one is introduced. When I was working for Corporate Europe Observatory, we once saw a bill on business secrecy being pushed onto the Commission’s agenda, because companies wanted to make sure that their employees wouldn’t reveal secrets, especially after what had happened regarding tax evasion scandals. But this is rare.

Where do lobbyists physically work ?

Their offices are located in the European area. It’s an area made pretty much of offices only, a bit like the City in London. The language spoken is mainly English, not French or Dutch [the official languages in Belgium, ed.] The European institutions, such as the Commission, Council and Parliament, are very close. Lobbyists can also go for a coffee with a journalist or have a meal with an official. Coffee shops and restaurants close to the institutions are hotspots for lobbying.

Are they well-known to everyone ?

I can tell you a little anecdote to answer that. One day I wanted to talk to Peter Chase, a former US trade negotiator, who used to work for the US government, and then worked for the US business lobby. He now works for the German Marshall Fund, a major think tank. He was sitting in the back of a coffee shop where all the top lobbyists meet. When I came in, I had to wait for him for an hour and a half at the door, because at every step he made, someone came to meet him and talk to him. It was really obvious that we were in a high place of lobbying.

So it’s not hidden ?

No, everything is done quite openly, actually. For example, on Thursday evenings, at the Place du Luxembourg, in front of the European Parliament, many lobbyists and parliamentary assistants meet to have a drink or a meal. This collusion often dates back to the time when they were studying. Many of them studied at the College of Europe, and already knew each other. This makes the transfer of information between the private and the public easier. They also often live in the same neighbourhoods, their children go to the same schools, and they socialise outside of work. I once made a request for access to some documents. In one of them, a lobbyist wrote to a person from the Commission saying, "Following our conversation on Saturday at the golf course, could we meet to talk formally ?" This whole informal side of lobbying plays a significant role.

And such collusion opens further the revolving door between the public and private sectors...

Yes, unfortunately, that’s very common. The former Budget Commissioner, Günther Oettinger, finished his mandate at the end of November 2019, but he had already created his lobbying company in October 2019. He was allowed to do it. Same thing goes for the former Trade Commissioner, Phil Hogan. He had to resign in August 2020 because he had not followed the Covid-related safety rules. He quickly created his lobbying firm and is now working for large companies, like Vodafone. Again, all of this is permitted. Another example is with Association for Financial Markets in Europe (AFME), a lobby representing the world’s largest banks, and the European Banking Authority (EBA), the banking institution of the EU. Adam Farkas was the director of the EBA and joined the AFME overnight. And when the EBA wanted to replace him, it picked a man who worked for AFME. But this made a huge scandal. The European Parliament took up the matter and refused to appoint him as head of the Authority. These examples show that the movement between the public and private sectors is too fluid and unregulated. Only a big scandal can prevent it.

Moving on to free trade agreements, what do lobbyists do during the negotiations ?

People often imagine that the public decision-maker is totally at the beck and call of the private sector, and that companies will do the work of the EU negotiator. In fact, it doesn’t exactly happen like that. During the negotiations, on a daily basis, there is little influence from European companies, because the negotiator already has a mandate to open markets for European products and services abroad. The mission of the EU negotiator is to defend the interests of European companies. In my opinion, what is more problematic, as far as the democracy is concerned, happens at the moment when the decision to launch negotiations is made. For instance, looking at how the negotiations of the EU-Canada agreement (CETA) were launched, an alliance of European-Canadian companies was created, headed by a person very close to José Barroso, the President of the Commission at the time. It was these companies, mainly from the extractive sector in Canada and the services sector in Europe, that lobbied for the start of the negotiations. Businesses give the mandate, the impetus, and let the negotiators know what their needs are, and then the negotiators are responsible for translating those needs into the trade agreement.

So corporations don’t have a huge influence on negotiators at this stage ?

They are still active, but to a lesser extent. If there is no political tension, discord or controversy, corporations are there, supporting and providing information to the negotiators, but they are not going to be very proactive or make public statements. On the other hand, as soon as political issues appear, their lobbying starts again. This can be seen today in the agreement between the EU and Mercosur (Argentina, Brazil, Paraguay, Uruguay). Businesses have been communicating, organising events, and approaching decision-makers to put pressure on them and remind them that they want this trade agreement. But in other cases, such as the EU’s agreements with Vietnam and Japan, because there has been no controversy, NGOs are not talking about them, and the public is not informed, they don’t need to do much lobbying.

And what about the informal lobbying you were talking about earlier ?

The relationship between negotiators and companies is actually much more institutionalised at this point. For example, during the negotiations on the EU-US agreement (TTIP), I asked the Commission for a lot of official documents and I realised that every three months, the chief negotiator for services went to meet with the European services lobby, which includes companies like Veolia, Orange, Barclays, BNP Paribas, etc., to report on the state of the negotiations. And these meetings occur in any negotiation. First of all, I find it symbolically very strong, because it is the negotiator who goes to the lobby, and not the other way around. And this has been going on for years. This lobby was in fact created by Leon Brittan, the former EU Trade Commissioner in the 1990s. The European Commission wanted to have companies that could help them with the financial and services aspects of trade agreements. And since then, they have worked very closely together. But it’s not really lobbying at the end of the day.

And once the agreement is implemented, does the lobbying continue, in the context of regulatory cooperation for instance ?

Regulatory cooperation is an interesting case. When you look at the EU-Canada agreement text, and also at what was proposed in the agreement with the US, there are clear similarities with what was written in the lobbies’ positions, especially BusinessEurope’s. It’s almost like copying and pasting. The dialogue that is established in the framework of the regulatory cooperation is actually the continuation of the negotiations. It is often said of modern free trade agreements that they are live agreements. This means that, first you define what is going to be liberalised in the agreement during the negotiations. For example, in the case of CETA, Canadian exports of uranium to the EU, and European exports of milk powder to Canada. And second, the agreement acts that the parties will continue to talk, to negotiate, once in force. And in the context of regulatory cooperation, you can have, for example, a European negotiator who tells the Canadians that a new bill in Canada would prevent some investments in retirement homes, and the Canadian negotiator can complain about new European laws that restrict the use of GMOs. But ultimately it is a continuation of trade negotiations, with the same actors and the same collusion that I mentioned earlier.

What can be done to fight against this and bring it under the spotlight ?

To fight against lobbies, we need to create a citizen-based opposing force and get organised at the European level. But it is not very easy because few people have an interest and knowledge of European politics. There are also few European media that provide easily accessible information, i.e. media are in English, use technical language, etc. And finally it’s not easy for activists who are not specialists to be active within European groups. But I am not defeatist. It is necessary to keep on raising awareness. We realise that more and more people are aware of the weight lobbies have and fight against their influence. So there is hope !