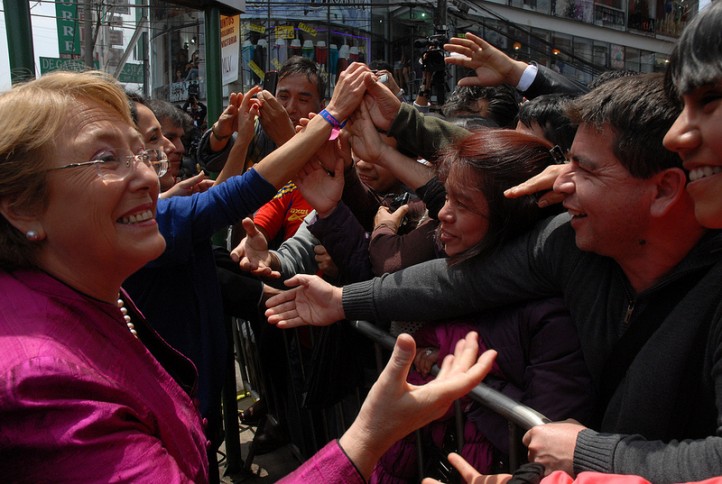 Can Chile curb the TPP?

With the U.S. Congress deadlocked over trade, Chile’s progressive new government may be able to win new protections and increase transparency in the TPP talks.

By Sarah Anderson and Imara Salas

President Barack Obama’s failure to win congressional support for “fast track” trade authority has weakened the hands of U.S. trade officials as they attempt to finalize the Trans-Pacific Partnership.

The other 11 governments involved in these negotiations should see this as an opportunity to take a hard look at whether the proposed trade deal serves the interest of people and the planet.

This would be particularly important for Chile, where a new ruling coalition will soon come to power after trouncing the party that has represented that country in the TPP negotiations for the past four years. Michelle Bachelet, who led the country from 2006 to 2010, is returning to the presidency on March 11 as the leader of a coalition of seven parties representing the center to far left end of the spectrum.

Bachelet’s own Socialist Party is not known for being critical of free trade. In fact, they were in power when Chile negotiated a bilateral trade agreement with the United States, which went into effect in 2004. That deal was largely modeled on the North American Free Trade Agreement, which went further than any previous deal to expand corporate rights and remains the preferred U.S. model.

Back then the Chileans requested an exception from the U.S. blueprint that would’ve allowed them to maintain their authority to control volatile flows of capital across their border — policies that had insulated the country from the worst effects of the late-1990s global financial crisis. But officials in the administration of President George W. Bush wouldn’t budge.

This remains a sore point — even for the outgoing conservative government of President Sebastian Piñera. A leaked draft of the Trans-Pacific Partnership’s investment chapter revealed that Chile has been attempting once again to obtain an exemption for capital flow management policies. In the past decade there has been a major shift in consensus on these policy tools, with the International Monetary Fund now recognizing that such controls are necessary in certain circumstances.

President-elect Bachelet is rumored to be even more determined than her predecessor to win back this important policy space. And her campaign trail statements suggest she also wants to protect national sovereignty from trade rules that might undermine access to medicines and other sensitive public policy matters. Specifically, she called for a thorough review of the TPP’s “scope and implications, in order to prevent the weakening of already established agreements on intellectual property, pharmaceuticals, government procurement, services, and investment, or lead to the establishment of new rules in the financial sector.”

It’s hardly surprising that Bachelet, a medical doctor, would be concerned about a U.S. push to weaken protections for generic medicine programs, revealed through a leaked TPP negotiating draft in November 2013.

In December, her campaign manager (and future minister of finance), Alberto Arenas, explicitly called on the government to stop the negotiations until more information was released. This followed a public declaration signed by 34 representatives and 15 senators from across the political spectrum, as well as over 50 civil society leaders, demanding a halt to the talks. One survey indicated that over 70 percent of the population objected to the secrecy of the negotiations.

Senator Ricardo Lagos Weber, the son of the former president and a former trade negotiator, also cautioned that unless more information was disclosed, “it is unlikely that it will pass through Congress.” Similarly, five former foreign affairs ministers issued a joint statement expressing concerns about the way the current administration had pursued the negotiations.

The lame duck government has rebuffed all this pressure. But now the political divide over trade in the United States will likely drag out the TPP process, giving Chile and other nations more time to assess the deal. Few members of President Barack Obama’s own party are proving willing to stick their necks out in an election year and support his controversial request for “fast track” trade promotion authority. This procedure, through which Congress agrees to an up or down vote on deals forged by the executive branch, is considered necessary to clinch a final deal on the TPP.

If President Obama had fast track authority in hand, Chile and all the other governments involved would face extreme pressure to finalize a deal with minimal changes so that it could be rammed through the U.S. Congress before election fever heats up.

But with fast track dead (at least for now), the free trade juggernaut has lost steam. President Bachelet’s administration would do well to take full advantage of this slowdown to ensure that the deal advances the interests of her own people.

Sarah Anderson directs the Global Economy Project at the Institute for Policy Studies. Imara Salas is a Chilean university student and IPS intern.