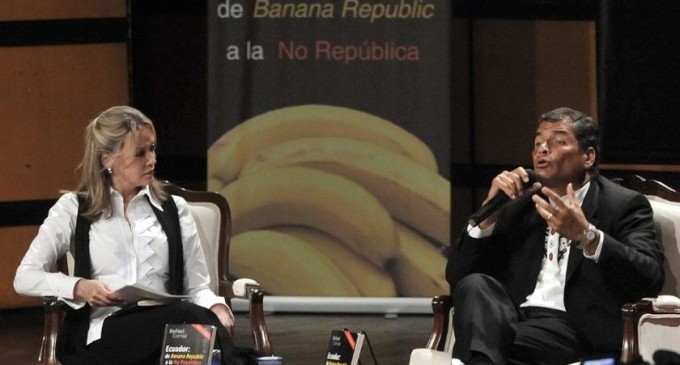 President Rafael Correa said the agreement was negotiated "carefully, with much patriotism."

The European Union finally reached a trade agreement with the world’s number one banana exporter, Ecuador. The Ecuadorian Minister of Trade, Francisco Rivadeneira, said yesterday (17 July) that his country had finalized negotiations with the EU to become part of the Multilateral Trade Agreement saying that this achievement was the result of five-year-long efforts. The deal was initially supposed to be regional but Ecuador’s leftist President, Rafael Correa, generally opposes free trade which is why he halted talks in 2009, leaving Peru and Colombia out. Both countries signed their own agreements with the EU in 2012. President Rafael Correa is convinced that free trade agreements undermine developing countries and harm the development of local industries. In spite of this, he was trying to diversify the oil-dependent economy in Ecuador also through trade-related measures as the 16-million country is the smallest member of the Organization of Petroleum Exporting Countries (OPEC). Mr. Correa pledged he would seek to boost trade while he was campaigning for presidential elections last year.

Since the EU-Ecuador negotiations resumed in January this year, they basically focused on the issue of bananas, which is the major non-oil export product of the country. Prime Minister Rivadeneira added that the EU had received assurances that the common market would not be inundated with bananas with a “trigger” tariff to be implemented once a certain level of imports was reached. The agreement further states that Ecuador will receive zero-duty access to the EU internal market for its industrial goods which is hoped to boost Ecuador’s agro-industrial industry. In return, the EU is to get better access to the country’s public procurement and Quito also pledged to stick to the regulations of the World Trade Organization (WTO) regarding the protection of intellectual property rights. The EU Commission reports that, in 2013, EU imports from Ecuador reached 2.6 billion euros while exports totaled 2.3 billion euros.

QUITO, Ecuador—Ecuador and the European Union reached a trade agreement on Thursday, which supporters say will allow the Andean nation to increase its exports to the European bloc by at least $500 million in the next three years.

"After almost four years of work, finally we have closed a balanced agreement with the European Union, which maximizes opportunities, reduces to a minimum the costs, respects the country’s development model and allows to protect our sensitive sectors," Ecuador’s Foreign Minister Francisco Rivadeneira said in a statement from Brussels, but he didn’t provide further details.

Officials from the EU’s delegation in Ecuador weren’t available for comment.

President Rafael Correa said this week that Ecuador could lose hundreds of millions of dollars worth of exports without a trade deal with the EU. He said the agreement was negotiated "carefully, with much patriotism."

The most sensitive issues in the negotiations were related to intellectual property, strategic sectors and public-sector purchases.

"This is excellent news for the country, for exporters and for the economy," said Daniel Legarda, executive vice president of the Ecuadorean Federation of Exporters.

The European Union is the main market for Ecuador’s non-oil exports and the third-largest market for manufacturing exports.

Exports for this market have been increased by an average of about 4% per year and exporters expect an additional increase of at least $500 million during the next three years.

The Andean country sends about 30% of its non-oil exports to the EU, mainly to Spain, Holland, Germany and Belgium. Ecuador’s exports include bananas, shrimp, cocoa, tuna and roses.

Between January and May Ecuador exported to the European Union goods valued at about $1.3 billion, according to the country’s Central Bank. Its imports from the block totaled approximately $1.1 billion. Last year exports to European Union totaled $3.0 billion.

Write to Mercedes Alvaro at mercedes.alvaro@wsj.com