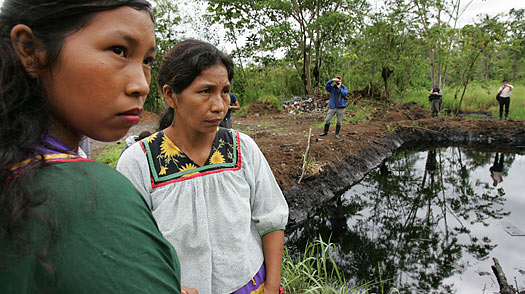 The lawsuit against Chevron was filed on behalf of 30,000 members of 80 Amazon communities

Ecuador: Still a ways to go, after historic ruling against Chevron

(IPS) — The plaintiffs in the case against Chevron tried in Ecuador, who won a historic 9.5 billion dollar verdict after a nearly 18-year struggle over environmental and health damages caused in a quarter-century of oil operations in the Amazon jungle, are not disheartened by the road still ahead.

Chevron announced that it would appeal the sentence handed down Monday by Judge Nicolás Zambrano in Nueva Loja, the capital of the northeastern Ecuadorian province of Sucumbíos, which found the U.S. oil company guilty of an environmental disaster in the Amazon jungle, as locals have been arguing in legal action that began in 1993.

"This was a trial on behalf of the people, and the beneficiaries are not just the (30,000) plaintiffs but all of the inhabitants of the provinces of Sucumbíos and Orellana," some 223,000 people, Juan Pablo Sáenz, one of the members of the plaintiffs’ legal team, told IPS.

Chevron tried to shield itself behind two last-minute legal decisions, issued by a court in the United States and by the Permanent Court of Arbitration in The Hague, which were received with a dismissive attitude by authorities in Ecuador.

On Feb. 9, the court in The Hague ordered Ecuador "to take all measures at its disposal to suspend or cause to be suspended the enforcement or recognition within and without Ecuador of any judgment against" Chevron.

The petition filed in The Hague by the U.S. oil giant cited violations of Ecuador’s obligations under the United States-Ecuador Bilateral Investment Treaty and international law.

And on Feb. 8, a federal judge in New York issued a temporary restraining order barring the plaintiffs from seeking to enforce any judgment against Chevron in the case.

Although the order expires on Feb. 22, the judge will hold a hearing to decide whether to impose a more concrete injunction, based on what he called "serious questions" raised by Chevron with regard to the enforceability of such a judgment, based on the company’s arguments that the ruling was procured by fraud.

That the firm does not plan to rest was underscored by an incident that occurred just after the press conference given Tuesday in Quito by leaders of the Asamblea de Afectados por Texaco (AAT - Assembly of those Affected by Texaco), and some of their lawyers, where they celebrated the victory but also mentioned the fight still ahead.

A man who was likely employed by a private postal delivery service pushed his way through the journalists to reach the head of the AAT, Luis Yanza, with an envelope containing documents, which the activist refused to take.

The messenger then sought out other leaders of the group and lawyers who had dispersed around the room to make statements to the media. But they also refused to take the package.

The envelope contained a summons from a U.S. court. "This is not how we summon people to court in Ecuadorian territory," Yanza told IPS. "We will only accept a summons if it comes through diplomatic or judicial channels, and in accordance with Ecuador’s legal order."

Finding no one who would take the package, the carrier put it on the floor and left.

The lawsuit against Chevron was filed on behalf of 30,000 indigenous and mestizo (mixed-race) members of some 80 Amazon jungle communities who are demanding that the company clean up the pollution and pay reparations for the health damages caused by Texaco during eight years of prospecting and 18 years — 1972 to 1990 — of oil drilling in the rainforest of northeastern Ecuador.

Texaco was acquired by Chevron in 2001. But even before then, Chevron was operating in the Ecuadorian region in question as a partner of the state-run Petroecuador, after Texaco pulled out.

The trial, which opened Nov. 3, 1993, suffered multiple delays. After nine years in the U.S. courts, it moved to Ecuador in October 2003.

"This was a historic ruling for all humankind," said Alberto Acosta, former president of the constituent assembly that rewrote Ecuador’s constitution in 2008 and a former minister of energy and mines.

"This is a clear announcement to all oil and mining companies that the damage they cause to the environment will not go unpunished," he told IPS.

Acosta pointed out that the sum Chevron was ordered to pay was the biggest ever, for the world’s worst oil-related disaster, "which was not even surpassed by the Gulf of Mexico" — the 2010 oil spill that resulted from an explosion of a BP deepwater drilling rig — or by the 1989 oil spill by the Exxon Valdez tanker on the coast of Alaska.

"The damage caused by Chevron was 10 times worse," he said.

The judge in Nueva Loja ordered Chevron to pay 8.6 billion dollars in fines, clean-up costs and reparations, plus another 10 percent as established by the law on environmental management.

To come up with that figure, Judge Zambrano took into account 100 studies and reports by experts, many of them provided by Chevron itself, according to Pablo Fajardo, the plaintiffs’ lead lawyer.

In his ruling, Zambrano also ordered the company to issue a public apology to local indigenous people for the pollution of the rainforest where they live. If Chevron fails to do so within 15 days of the verdict, the fine will be doubled.

The oil firm announced that it would appeal the ruling, which it described as "illegitimate and unenforceable."

The judgment "is the product of fraud and is contrary to the legitimate scientific evidence," Chevron said in a news release Monday.

The emphasis on the unenforceability of the ruling was met with sarcasm on the part of authorities in Ecuador. In a statement issued Sunday, before the verdict was handed down, prosecutor general Diego García said that any lawyer knows that a first instance court judgment is subject to appeal and thus unenforceable.

Yanza and Quichua indigenous leader Guillermo Grefa from Sucumbíos said the corporation was pressuring the Ecuadorian government of centre-left President Rafael Correa to interfere in the process.

Fajardo said the company has spent between 800 million and one billion dollars "to defend itself and attack the plaintiffs and their lawyers," while the expenses of the plaintiffs "amount to no more than 20 million dollars," covered by Ecuadorian and international non-governmental organisations and by "the efforts and sacrifices of the affected parties."

But the AAT lawyers are also considering filing an appeal, because they consider the sum insufficient to cover the environmental damages and the cost of the health care needed by people suffering from leukaemia and other kinds of cancer, liver ailments, and respiratory and skin problems, which studies attribute to the pollution caused by the oil company.

"No amount in the world can bring people back to life," Yanza said. "But this amount is inadequate to redress all of the damages caused by the pollution: to the water, to the soil, to life itself. We have to remember that many people died, which is why we believe the amount should be revised."

Sáenz said the second instance court "should take no more than six months, or in the worst case, a year," to hand down a verdict. After that, Chevron would still have the possibility of turning to the National Court of Justice.

"We believe that the end of the trial is near, compared to the nearly 18 years of struggle, and that justice will be done," Fajardo said.