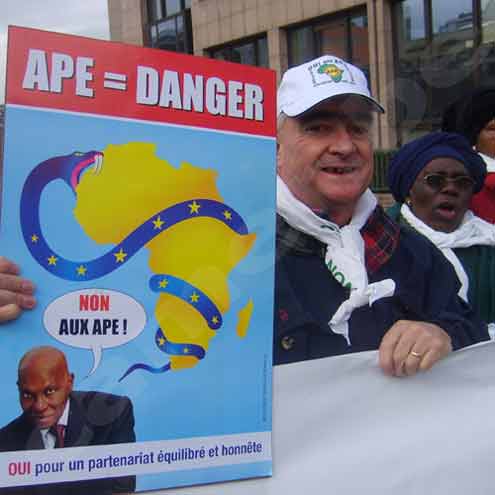 EPA: Cameroon set on suspending tariff dismantling till the end of 2020 despite the EU’s protests

(Business in Cameroon) - Despite the European Union’s (EU) protests, Cameroon will maintain the suspension of tariff dismantling planned by the Economic Partnership Agreement (EPA) that binds it to EU countries. This was revealed in a letter sent by the Minister of Economy Alamine Ousmane Mey (photo), on November 10, 2020, to Hans Peter SCHADEK (Head of the EU delegation in Cameroon). The said letter was sent by the minister in reply to another letter (dated August 14, 2020) by the EU.

According to the Minister, Cameroon took that decision in "good faith" in light of Article 57 of the 1969 Vienna Convention on the Law of Treaties.

The letter sent by the Minister of Economy even informs that the temporary suspension does not only apply to products with high-tax yield (like fuel, cement, tourism, and transport vehicles, etc… that belongs to the third category) but it also applies to products of the 2nd category whose tariff rates would have been dismantled further (from 45 to 60%) on August 4, 2020. Let’s note that the tariff dismantling for products in the 2nd category started on August 4, 2017, and was supposed to be complete by 2023 at the rate of 15% tariff dismantled yearly.

Mr. Alamine Ousmane Mey further indicates that even if the EU rejects Cameroon’s choice to apply article 31 of the EPA, the country is still allowed by Article 57 of the Vienna convention to suspend the implementation of the EPA. Indeed, the said article allows a party to temporarily or even definitely suspend the implementation of an agreement due to irresistible and unforeseen circumstances.

Indeed, to justify its decision, Cameroon first invoked Article 31, which states that “after having examined alternative solutions, a Party may apply safeguard measures of limited duration.”

According to the article, the safeguard measures should only be taken “where a product originating from the territory of one Party is being imported into the territory of the other Party in such increased quantities and under such conditions as to cause or threaten to cause” specific problems.

The problems include "serious damage to the domestic industry producing like or directly competitive products in the territory of the importing Party,"  "disruption in a sector of the economy, particularly where this disruption gives rise to major social problems or difficulties which could seriously jeopardize the economic situation of the importing Party" or "disruption in the markets of like or directly competitive agricultural products or the mechanisms regulating those markets."

The Covid-19 pandemic, which is the force majeure behind Cameroon’s decision, can not be considered as one of the specific problems highlighted by Article 31 of the EPA. Thus, the country’s final decision to invoke article 57 of the 1969 Vienna Convention. Based on that article, the country is set on suspending the implementation of the EPA till the end of the current financial year.

"While welcoming the European Union’s financial support in this context, the government of the Republic of Cameroon marks its commitment to restore, as of January 1, 2021, the tariff dismantling calendar in the Cameroon-European Union economic partnership agreement. It also urges the European Union’s immediate support in the implementation of the development component of the EPA," the Minister of Economy writes, raising the issue of the development component that has always been a cause for conflicts between the EU and ACP countries.

Cameroon started implementing the EPA on August 4, 2016. The said agreement consecrates the opening of the country’s market to EU imports in three (3) stages corresponding to the three groups of products to be liberalized. The tariff dismantling on products in the first category started on August 4, 2016, at the rate of 25% tariffs dismantled yearly. The products included are those that aim to reduce poverty and improve residents’ living conditions. On August 4, 2019, the dismantling was completed.

For products belonging to the second category, the tariff dismantling started on August 4, 2017, at the rate of 15% tariff dismantled yearly on products that aim to boost local production. On August 4, 2019, the tariffs were dismantled by 45%. That rate was supposed to reach 60% but, because of the coronavirus pandemic, Cameroon decided to temporarily stop the implementation of that provision.

According to the country’s customs directorate, the budget revenue shortfall that ensued from the implementation of the EPA reached XAF16 billion on March 31, 2020.