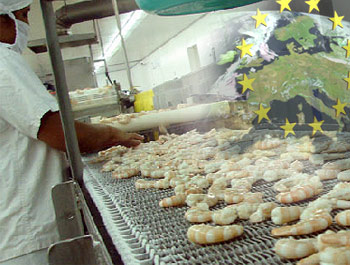 EU accord to favour shrimp industry

Honduran shrimp exports to the Community market are expected to increase by 15 per cent as part of the framework of the association agreement signed between the European Union (EU) and Central America.

At present, the Honduras shrimp industry exports about 25 million pounds of shrimp to the markets of the United Kingdom, Spain and Germany.

“The increase in exports depends a lot on the market and the stability of the euro, but we think that this agreement aims to stimulate production,” said Marco Polo Micheletti, executive director of the National Aquaculturists Association of Honduras (ANDAH) to El Heraldo.

"We see ourselves highly favoured by the elimination of 3.6 per cent of the tariffs that the industry currently pays for the entry of shrimp to the European market, although the entrance in force will be up to two years from now,” the union head added.

Meanwhile, Santiago Ruiz, president of the Honduran Council of the Private Company, (COHEP) indicated: “Honduras won a lot in these negotiations and, as in every agreement, there are winners and [there are] losers.”

"Now its the executives’ turn, then the government, to issue clear rules that attract foreign investors to the main areas that were benefited, and have exports rebound,” he continued in La Prensa.

The Agreement signed between the Central American countries and the EU will allow for the creation of more than 20,000 jobs.

The Community government will grant tariff-free, immediate access to 58.5 per cent of agricultural products and 99.2 per cent of the industrial sector.

Meanwhile, Central America offers immediate access to 34.1 per cent of the EU’s agricultural products and 50.2 per cent of its industrial products.

The president of Spain, Jose Luis Rodriguez Zapatero, described the Association Agreement as “historic” and he expressed hope that the countries of both regions benefit enormously.

The agreement will entail an increase in Central American exports to the European market of EUR 2.6 billion annually, whereas Europe’s revenue is estimated to reach EUR 2.4 million.