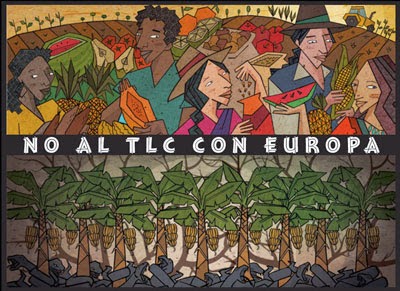 The EU and Ecuador are publishing the documents of their new Association Agreement, which will see Ecuador joining the EU’s existing accord with Colombia and Peru. Both the EU and Ecuador are currently carrying out a legal revision of the texts, after which the necessary administrative and legal steps will be taken to approve Ecuador’s accession to, and application of, the Agreement.

Colombia and Peru will also be involved in the approval process by the Trade Committee.

The negotiations for a trade agreement between the EU and the Andean Community (Bolivia, Colombia, Ecuador and Peru) were launched in June 2007. After stalling in 2008, the talks continued in 2009 with Colombia, Ecuador and Peru. In July of that year Ecuador dropped out of the negotiations. An agreement was concluded with Colombia and Peru in March 2010 and signed in June 2012. It has been provisionally applied with Peru since 1 March 2013 and with Colombia since 1 August 2013.

Contacts were maintained with Ecuador and Bolivia after they left the talks. Seeing the potential for improving EU-Ecuador trade, as well as for its domestic development objectives, Ecuador returned to the negotiating table in January 2014. An agreement was reached achieved in July.

The agreement will allow Ecuador to benefit from improved access for its main exports to the EU – fisheries, bananas, cut flowers, coffee, cocoa, fruits and nuts. The terms of the new arrangement go beyond the unilateral EU Generalised Scheme of Preferences, for which Ecuador is no longer eligible. The Agreement will also provide improved access to the Ecuadorian market for many key EU exports, for example in the automotive sector or for alcoholic beverages. However, the agreement will not only secure access to markets; more importantly it will also create a stable and predictable environment that will help boost and diversify trade and investment on both sides.

1. Draft Annotations to the Text of the Agreement

3. Draft Annotations to the Annex concerning the definition of the concept of "originating products" and methods for administrative cooperation