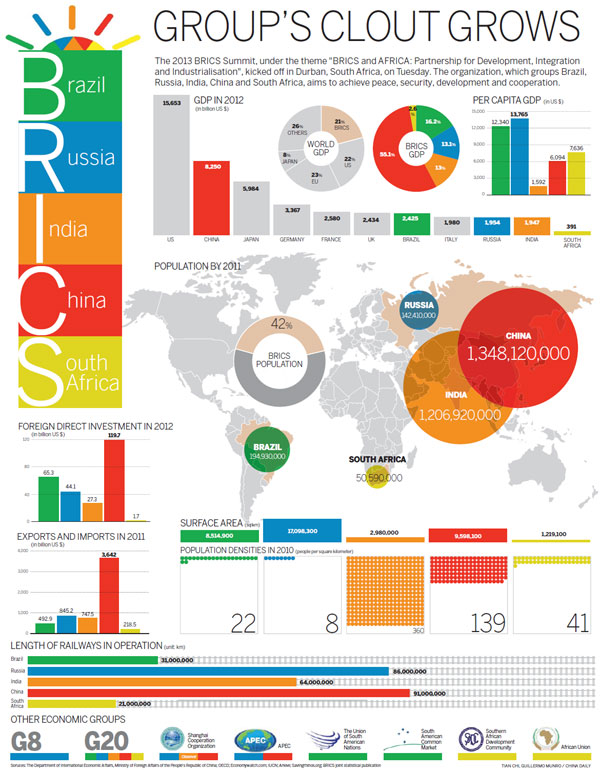 BRICS members should create a free trade agreement to increase the power and voice of emerging economies in the world economy, Chinese experts say.

"BRICS should consider proposing a free trade agreement at the summit, regardless of whether it’s feasible right now," said Wang Junwen, chairman of the China Association of International Trade.

Wang said the current cooperation of the BRICS nations - Brazil, Russia, India, China and South Africa - is "of more political significance than an economic one".

"Despite challenges and competition, all five members of the group intend to increase their voice in the multilateral trading system, which is dominated by developed economies such as the US, the EU and Japan," he said.

A bilateral FTA between the United States and the European Union is expected to start in June and conclude in 2014. Through the high-standard Transatlantic Trade and Investment Partnership, the US and the EU will have the opportunity not only to expand trade and investment across the Atlantic, but also to contribute to the development of global rules that can strengthen the multilateral trading system. Meanwhile, the US also has been advancing the Trans-Pacific Partnership Agreement, or TPP.

"The TPP and the trans-Atlantic trade and investment pact, if introduced, will shape global rules as its members account for more than half of total global trade and GDP," said Sun Zhenyu, chairman of the China Society for World Trade Organization Studies (CWTO), a think tank of the Ministry of Commerce.

"BRICS surely needs to strengthen cooperation, and better cooperation will bring about a greater role in global governance."

CWTO Vice-Chairman Zheng Zhihai said China must take the lead in such efforts.

"China is the leader of the BRICS. It can first start the FTA talks with South Africa and then advance the pact with India, because a feasibility study has already been concluded. The final goal is establishing an FTA of the BRICS countries," he said.

A recent report from Standard Bank said that Intra-BRICS convergence is being led by China, and China plays a part in 85 percent of intra-BRICS trade. China is one of the top-three export destinations of each of the four other BRICS countries.

Zhao Longyue, director of the China Center for International Development, said: "China is now exerting more influence on world economic affairs, but has a much smaller role in global politics and international diplomacy. In order to be the leader of the BRICS, China should deliberately merge its own interests into the group’s with a comprehensive guideline while the group still lacks a core."

Wang Hui, a consultant of CWTO’s foreign economic and trade advisory council, added that China’s advantage in enhancing its role in global trade rules relies in its domestic market.

To increase its economic power, BRICS should develop its infrastructure, for example setting up a secretariat, as the Shanghai Cooperation Organization did, as well as bringing in more members, such as Indonesia, South Korea and Mexico.

"The growth of China and other members will easily lift the group’s trade to $500 billion in three years. But that’s not important and not attractive to other members," Wang said.

"The future goal is building up an FTA of emerging economies," he said.