Inaugurating the Center for National Movements against the South Korea-U.S. FTA.

The South Korea-U.S. FTA Will Only Reenact the Historical Annexation of Korea by Japan. Let Us Stop the FTA and Rescue the Country!

The agreement on suspension of pharmaceuticals price markdown in Oct. 2005, agreement on lowering standards of automobile exhaust fume in Nov. 2005, forced settlement in the National Assembly on sanction over rice negotiation in Dec. 2005, agreement on resumption of American beef importation on Jan. 13, 2006, agreement on the strategic flexibility of American forces in Korea on Jan. 19, announcement of screen quarter reduction on Jan. 26, dismissal of the hearing committee on Korea-US FTA on Feb. 2, surprise announcement of Korea-US FTA negotiation on Feb. 3, commencement of Korea-US FTA preliminary negotiation on Mar. 6, the State Council decision of screen quarter reduction on Mar. 7. These are the measures that took place over the last four months, a breathtaking schedule to launch the negotiation let in the evil spirit called the South Korea-U.S. FTA into the country. 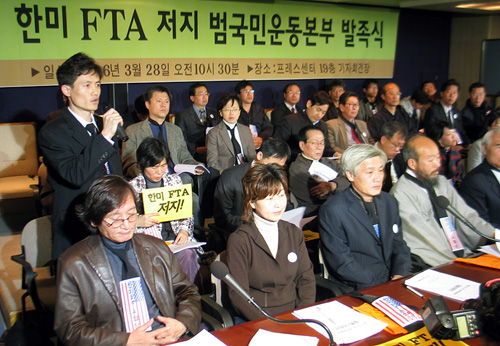 We now fear that the evil spirit of the FTA threatens an imminent landing. Unless this landing is blocked, Korean economy, nay, the whole Korean society will soon fall under U.S. unilateralism built upon transnational capital, Korea-U.S military alliance, and of course the new gained strategic flexibility of the U.S. forces in Korea. The FTA with South Korea whose economy now ranks as the 10th largest in the world may provide a crisis-solving breakthrough for the U.S. now verging on national bankruptcy as a consequence of the "twin deficit." But this only means that South Korea, still enraptured by the dreamy notions of neoliberalism and globalization, shows once again its inability to say "No!" to the United States and risks a breakdown of its society.

"The Korea-US FTA is absolutely necessary to overcome the social polarization of Korean people." "Given the growing intensity of Sino-Japanese competition, the strengthening of Korean-American Alliance will contribute to striking balance among North-east Asian countries." "Regardless of fierce nation-wide protests, I will dedicate my remaining terms of office to realizing the FTA." "For our competitiveness, we ought to be able to contend with top-business groups of the world." With these groundless delusions, the "Participatory Government" began a secretive move resembling a military operation to prepare the FTA. Sadly, we are here reminded of the dark days of the authoritative regimes. For does not the "Participatory Government" act like a wolf in sheep’s skin as an insidious missionary of neo-liberal globalizaion? Is it not about to cross the point of no return to real democracy? The government representing the exclusive interests of Korean and American financiers and capitalists is not to be considered ’our’ government. President Roh and his government officials are throwbacks of the Pro-Japanese who sold out the country a century ago. These similarly argued that "The open-door policy is the way out," and that "The only alternative lies in the importation of Japanese civilization."

With the FTA and the Strategic Flexibility of American Forces in Korea, the United States Will Strengthen Its Dominance over the Korean Peninsular

What the United States demands in the FTA is nothing less than a 100% open-door policy from South Korea. It will not admit three basic labor rights. Nor will it allow Korea’s sovereignty over food, culture, environment, and jurisdiction. Utilizing the terms of the existing military alliance between the two countries, the United States also high-pressured South Korea into agreement on strategic flexibility for a rapid dispatch of American and Korean forces to troubled areas of the world. We interpret that the demand for the FTA and strategic flexibility derives directly from the desire on the part of the United States for absolute dominance over Korean Peninsular. There is no doubt that the FTA and strategic flexibility constitute U.S.’s new plan for world hegemony. The measures attempt to turn South Korea into an outpost for U.S.’s strategy to contain China.

Like Torrents under Frozen Ice, Nation-wide Protests Are under Way

Last winter in the turmoil of protest a couple of farmers died, and last February film directors and actors took to the streets to protest against the reduction of screen quota. Workers, farmers, intellectuals, artists, and other conscientious people in every walk of life are coming to form a unified front to stop the FTA. Countermove councils and committees comprising as various social sectors as film, agricultural-fishery, professors and academics, health-medicine, audio-visual media, cultural-artists, educational-PTA’s, and intellectual property rights have already been organized. Still in other sectors such as labor, law, public service, environment, feminism, and finance, attempts are being made to form similar organizations to prevent the agreement. These efforts are not confined to the metropolitan area either; they spread throughout the country. It is only policy-makers and bureaucrats of commerce, plutocrats, conservative journalists and politicians who have opted to support the FTA. Deaf to nation-wide protests against it, they have just become traitors to their country.

In the Name of History and People, We Stand up to Check Korea-US FTA

Now, an all-out people’s war is inevitable. We march against U.S unilateralism. We oppose its neoliberal globalization, its strategic flexibility, its demand for an FTA with South Korea. We say "No!" to economic exploitation by transnational capital. For us, there can be no sidesteps, no hideouts. People gather all over the country to protest against the FTA. United, we shall overcome small differences. Let us raise our torches up above to signal that we have risen up. We shall create festivals out of people’s uprisings. In our joyful revolution, we shall terminate the U.S. attempts to exploit the Korean people. We shall also bring the treacherous supporters of the Korea-US FTA before the tribunal of conscience and justice.

Today, thus inaugurate "The Center for National Movements against the Korea-US FTA." We hereby proclaim a war against the forces supporting the agreement and predict that with people’s united struggle we shall prevail. We appeal to every citizen of the country to join us to save our country. We need each everyone’s participation. "The Center for National Movements against the South Korea-U.S FTA" will become a wild fire on the prairie to start a nation-wide fight against the Korea-US FTA. Let us open up a new world for our future!