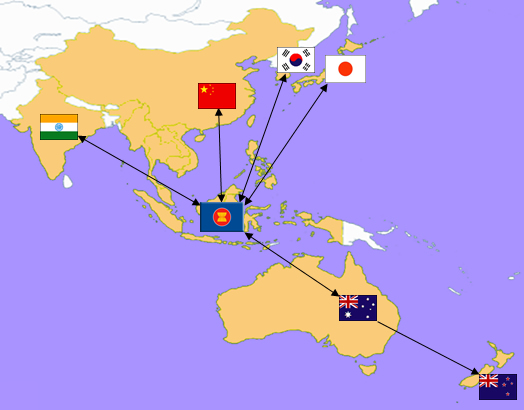 RCEP has been looked upon by Malaysia and other nations in the region as one of the most ambitious regional economic integration initiatives meant to integrate Asean economy with the global economy.

NEW DELHI: India overcame resistance from China to become a part of the Regional Comprehensive Economic Partnership (RCEP) agreement, an Asean + 6 grouping which is set to emerge as one of the most significant free trading blocs in the world, government sources confirmed.

Despite Beijing’s reservations, India participated in the first round of negotiations held recently for RCEP because of support from several Asean nations led by Malaysia which insisted on India’s involvement. The RCEP comprises China, India, Australia, New Zealand, Japan and South Korea apart from the 10-member Asean.

Government sources here as well as Malaysia’s minister for international trade and industry Mustapa bin Mohamed told TOI that there was no objection any longer to India’s participation in RCEP which seeks to achieve greater regional economic integration. "Let us not go into the past... the fact is that there is complete unanimity in RCEP now and that is what matters,’’ he said in reply to a query about China’s opposition to India’s involvement.

According to government sources, there were certain issues raised by China over India’s participation but Beijing had no option but to acquiesce after it noticed popular support for India. The second round of negotiations for RCEP will be held in Australia in September. The agreement is likely to come into effect in 2015.

After it was first proposed in the 2011 Asean summit, RCEP has been looked upon by Malaysia and other nations in the region as one of the most ambitious regional economic integration initiatives meant to integrate Asean economy with the global economy.

Asean countries, many of which have had territorial spats with Beijing in the South China Sea, look upon India as an important partner, not least Malaysia which is fast emerging as a crucial economic partner for India. While the FTA with Asean in services and investment is still being awaited, India’s high commissioner to Malaysia Vijay Gokhale said Malaysia has already given India a lot bilaterally in services.

Replying to a query over the India-Asean FTA in services, Mohamed said an agreement will be signed in August.

Mindful of the interests of several Asean countries in South China Sea, India also came out in support of the demand for a code of conduct to avoid any conflict in the disputed region. "We urge all parties concerned to take forward these discussions towards adoption of a code of conduct in the South China Sea on the basis of consensus,’’ foreign minister Salman Khurshid said at the 20th ARF meet in Brunei.

"We oppose the use or threat of use of force. We hope that all parties to disputes in the South China Sea region will abide by the 2002 Declaration on Conduct in the South China Sea and work together to ensure peaceful resolution of disputes, in accordance with international law, including 1982 UNCLOS,’’ he added.