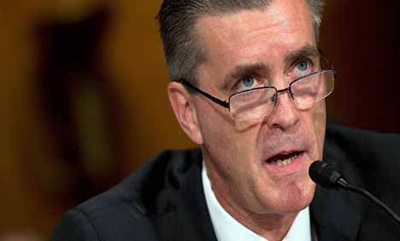 ‘Its high time to agree on BIT’

He was talking to mediamen during his visit to the mausoleum of Quaid-i-Azam Muhammad Ali Jinnah on Monday.

The envoy was of the view that "it is the high time that we agree on BIT.

He said that his immediate priorities would be to focus on the economic relationship between the United States and Pakistan.

Richard Olson said "in this regard it is important that we conclude a bilateral investment treaty which we have been negotiating for a number of years.

"I think it is high time that we agree on that", he further remarked.

"And then of course, I think we have to have a broader programme of cooperation for building for building for our relationship for the middle of the century not just for the years ahead", the US envoy added.

Replying another question, he said that our position vis-a-vis the Pak-Iran Gas Pipeline is well known.

Richard Olson said "we do have concerns about Iran’s potential development of a nuclear weapon and that we are not alone in that regard and that this is the strongly held consensus view of the international community".

About the visit to the Mazar of Quaid-i-Azam, he said that it was an honour to be here and pay respect at the final resting place of the Father of Pakistan Muhammad Ali Jinnah who had the vision of the unified democratic Pakistan one in which equality, fraternity and social and economic justice prevailed.

He said that the ideals of Quaid-i-Azam gave rise to the creation of Pakistan.

The US envoy pointed out that in August 1947, Muhammad Ali Jinnah said that our object should be peace within and peace without, who want to live peacefully and main cordial, friendly relations with immediate neighbours and with the world at large.

He said that these words reflect the common aspirations of the Pakistanis and the Americans to live in peace and security and pursue economic opportunities.

Richard Olson further stated that our two countries share common values, and we must work to continue to deepen our relationship and work to overcome common challenges.

He said that the United States is working together with the people and the Government of Pakistan to build a brighter future for every Pakistani.

The US Envoy to a question said that it is no secret that we have a challenging year in our relationship but since last summer both sides have been working hard to improve the relationship on the basis of our common interests and mutual respect.

He agreed with the positive comments made by the Foreign Minister about two weeks ago who described our relationship as being on a positive trajectory.