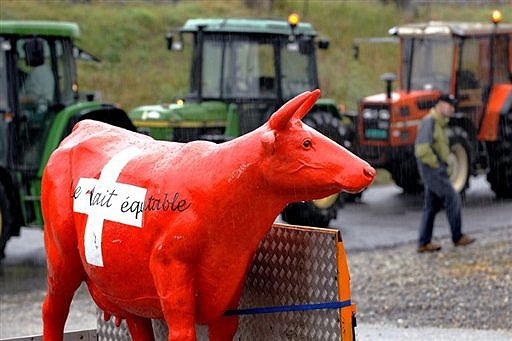 "Equitable Milk," is displayed during a farmers’ protest against falling milk prices on October 8, 2009 in Lucens

Economics Minister Doris Leuthard is keeping to the policy of liberalising agriculture, despite mounting criticisms and boot lobbing by angry farmers.

The minister told several Sunday newspapers that she would continue her negotiations on a free trade accord with the European Union.

Swiss farmers currently enjoy a certain amount of protection. On October 23 members of the farming union Uniterre threw wellington boots at Leuthard during the 6th Mountain Cheese Olympics in canton Jura to protest about liberalisation. She was protected by her bodyguards.

The minister also faces opposition from the rightwing Swiss People’s Party over the EU deal and from her own party, the centre-right Christian Democrats, which wants the accord shelved if World Trade Organization talks on free agricultural trade are not wrapped up by September 1, 2010.

"There’s no reason to change direction," Leuthard told the NZZ am Sonntag. "The suppression of customs duties for agriculture within the WTO framework is a sure thing."

The EU accord would prepare Swiss farmers for the future and open up a market of 500 million consumers, she added.

She told the Le Matin Dimanche newspaper that the agriculture issue was like banking secrecy, because, "one day the world will tell us that it no longer wants to give us privileges, that’s why the government has started negotiations with the EU".