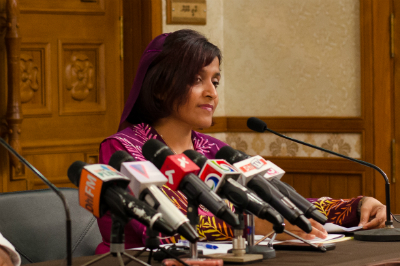 The Government of Maldives has today announced the boycott of Israeli products and the annulment of bilateral agreements with the country.

“President Yameen and the Maldivian citizens are with the Palestinian people”, said Foreign Minister Dunya Maumoon at a press conference this afternoon.

Dunya also announced that the Maldives would join other Arab nations in co-sponsoring a resolution at this week’s special session of the UN Human Rights Council (HRC) calling for the protection of an independent Palestinian state and the extension of humanitarian aid.

As well as an admittedly “symbolic” boycott of Israeli products, three agreements – signed in 2009 under the administration of President Mohamed Nasheed – would now be annulled, explained the foreign minister.

The agreements involved cooperation in areas of health, culture and education, and tourism.

“I do not think Maldivians want any help from Israel or want to keep up relations with Israel. So from now on, the agreements have been annulled,” she said.

While she noted that neither that former President Maumoon Abdul Gayoom nor the current government believed in maintaining such relations, she stopped short of announcing the severing of diplomatic ties.

Criticising Nasheed for having established diplomatic relations with Israel, Dunya said that his current statements in support of the Palestinians could not now be accepted.

Addressing the UN General Assembly in 2009, Nasheed argued that renewed diplomatic relations with Israel would be used to reiterate the Maldives’ support for a two state solution.

Acknowledging the impact of the Maldives’ boycott would be small, Dunya today noted that other small nations had done likewise with symbolic acts that had been appreciated by the Palestinian government.

“Even though what we give is small or symbolic, the way it is received is important. The message we want to give is we are with the Palestinian people,” said Dunya.

Explaining the boycott, Mohamed Hussain ‘Mundhu’ Shareef, minister at the President’s Office, said the government would soon announce a moratorium on the import of Israeli goods into the country after discussions with the Ministry of Economic Development and Maldives Customs Services.

While the government is calling on businessmen to join the boycott, it will still be possible for some Israeli products to enter the Maldives as the country does not check for the country of origin or manufacturers of imported products. Even so, the government will remove such products from shops in accordance with the Customs Act.

Shareef said that the Maldives may consider lifting the moratorium if the Israeli government’s violation of international resolutions stop.

“Israeli investment is not important for us. We want investments from countries with human rights practices that are acceptable to us,” said Shareef.

At home, the government remains under pressure from both the opposition and civil society who have called for bolder action concerning the recent escalation of violence in Gaza.

After the opposition leader Nasheed called on human rights defenders to raise their voices against “indiscriminate killings in Gaza”, his Maldivian Democratic Party (MDP) held a rally on July 12 in Malé criticising the government’s initial silence.

On the same day, President Abdulla Yameen phoned Palestinian President Dr Mahmoud Abbas to condemn “Israel’s inhuman actions”, and pledged to do everything necessary in the international arena to aid Palestinians.

Days later, thousands of Maldivians from all sides of the political spectrum gathered across the country to rally in protest against the Israeli offensive.

Nasheed has since called on MDP members to take the initiative and go to Gaza in order to act as a “human shields” protecting Palestinians.

Those who organised the nationwide rally are currently circulating a petition to be submitted to the People’s Majlis calling for a resolution to be passed by MPs.

Speaking to Minivan News, a member of the group said that over 8000 signatures had been collected in just two evenings. Working alongside civil society organisations in the atolls and local councils, many more were expected.

A second online petition has also been launched calling on the government to use Maldives’ seat in the UN HRC to request an investigation into human rights violations in Israel and Palestine and to hold discussions to find a peaceful resolution to the conflict.

The religious conservative Adhaalath Party, along with 11 civil society organisations, had established a donation fund to assist Palestinians affected by the ongoing conflict.