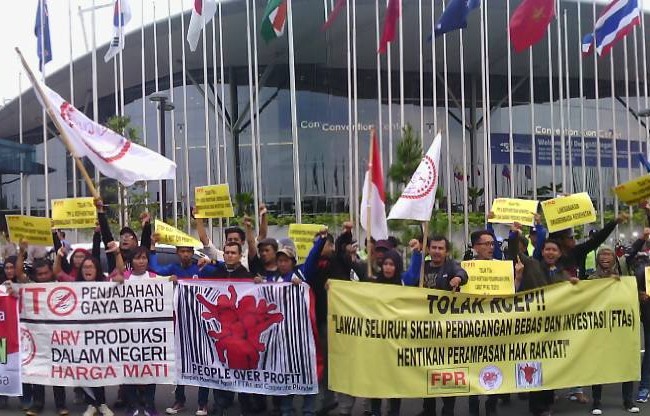 Minister hopeful RCEP talks can conclude by year-end By Bernama

Malaysia sees positive progress towards concluding the Regional Comprehensive Economic Partnership (RCEP), the world’s largest trade pact, by year-end, even though there are still some outstanding issues that needed to be resolved.

International Trade and Industry Minister Datuk Darell Leiking said the 27th round of the RCEP negotiations in China last month made good progress where a lot of issues were ironed out.

"We still have some outstanding issues. Instructions to the trade negotiators are to complete and settle the issues by the next meeting in Da Nang from Sept 19 to 27.

"All countries involved (in the negotiations) will look at a bigger picture for the future direction of the 3.4 billion market economy that we have," he told Bernama in Bangkok.

Darell and his counterparts from Asean member countries and its six dialogue partners gathered in the Thai capital on Sunday for the 7th RCEP Ministerial Meeting to review developments in the RCEP negotiations since the ministers last met in China on Aug 2 and 3.

A source close to Malaysia’s trade negotiator said the marathon-like RCEP talks in Zhengzhou, China last month made good progress, as it solved a number of issues, including to ease investor-state dispute settlement clauses (ISDS) on business standards.

“The negotiations progressed better than the past seven years,” the source said.

As pressures mount to conclude the deal this year, Darell assured that Malaysia’s interest and sovereignty are the top priority in concluding the agreement.

“When we create a new economic bloc, we have to listen to the people and our interest… We have to make sure we avoid all the pitfalls,” he said.

Citing an example, he said the Comprehensive and Progressive Agreement for Trans-Pacific Partnership, which was signed before Pakatan Harapan took over the government in May last year, does not fit it into the current policy.

Darell disclosed that some of the chapters and clauses closed before the change of government could never be reopened.

“Unfortunately, good or bad, we have to accept those chapters as they were negotiated before the Harapan government took over.

"However, we will use our policy on the outstanding chapters. We will not compromise the sovereignty of the country to conclude the trade deal,” he said.

Meanwhile, in a joint statement after the 7th RCEP Ministerial Meeting yesterday, the ministers reaffirmed their collective resolve to bring negotiations to a conclusion.

“The ministers are committed to avail negotiators with the necessary resources and mandate to bring negotiations to a close.

"The ministers made the collective call to negotiators at all levels to translate this commitment into constructive actions and positive outcomes,” it said.

The ministers also recognised that the negotiations have reached a critical milestone as the deadline for their conclusion draws near.

Notwithstanding the remaining challenges in the negotiations, RCEP participating countries are working on addressing outstanding issues that are fundamental to conclude the agreement this year as mandated by the leaders.

“Ministers agreed that participating countries should not lose the long-term vision of deepening and expanding the values chains in the RCEP.

“The ministers underscored that, successfully concluded, the RCEP will provide the much-needed stability and certainty to the market, which will in turn boost trade and investment in the region.

The RCEP negotiations were launched during the 21st Asean Summit in November 2012 in Phnom Penh.

The deal is likely to be signed next year if the negotiations can be finalised in the meeting in November in Bangkok.

It was reported that about 80 percent of the agreement is completed with negotiations on content in financial, telecommunication and professional services.

After seven years, the trade deal remains unsigned. India is widely viewed as the biggest barrier in concluding the RCEP as New Delhi allegedly opposed opening its markets to tariff-free goods and services.

However, New Delhi is hesitant about opting out of the RCEP pact.