World nations are expected to conclude at least 15 FTAs and to initiate negotiations for more than 10 new FTAs in 2004, the Trade Research Institute (TRI) of Korea International Trade Association (KITA) projected. The TRI also predicted FTA negotiations would be active in American and Asian regions as in 2003.

According to the institute’s research report ’2004 Global FTA Promotion Schedule,’ the number of FTAs to be concluded or newly negotiated in 2004 is likely to increase further, considering FTA negotiations in progression that have not set target dates for conclusion and joint FTA research being conducted worldwide. On January 1, 2004, five new FTAs were put into effect.

The 2004 FTA promotion schedule by nation implies that the United States and Japan will become the busiest nations for FTA negoitations. The U.S. plans to work on a total of eight FTA negotiations composed of new ones with Bahrain and the Dominican Republic in addition to those with Australia, SACU (South African Customs Union), etc. which it has already been pursuing. Moreover, the U.S. also has led FTAA (Free Trade Area of the Americas) negotiations participated in by 34 American nations.

Among Asian countries, Singapore, India, Thailand, etc. seem to be promoting FTA negotiations actively. Singapore intends to conclude FTAs with Korea, Jordan and India, while India plans to finalize FTAs with Thailand, Singapore and the Republic of South Africa, including SAFTA (Southeast Asia FTA), in 2004.

Meanwhile, Mexico, which has FTAs with 32 nations so far, is expected to focus on FTA negotiations in progress rather than on new agreements. The EU is unlikely to be active in promoting new FTAs for the time being as it will place emphasis on multilateral trade negotiations and expansion of its organization. With its signing of an FTA with Thailand ahead, which was agreed in October 2003, Australia is making an all-out effort in FTA negotiation with the U.S., which was targeted for conclusion by the end of 2003.

Both the American and Asian regions, whose FTA negotiation and conclusion will be most brisk this year, are Korea’s main export markets. These markets’ FTAs are feared to impact Korea’s exports whatever their form. Therefore, it is necessary for Korea to examine the FTA impact in advance, and seek and prepare countermeasures, KITA’s TRI suggested. 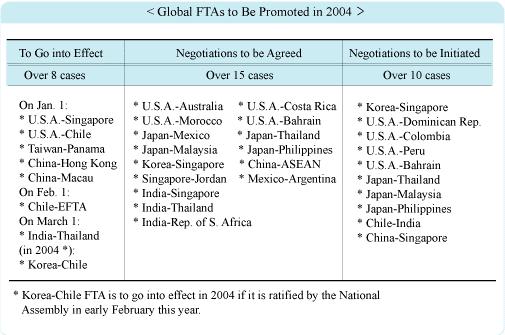 source: Over 15 FTAs to be concluded worldwide in 2004
bilateralism & multilateralism
Subscribe to bilaterals.org weekly