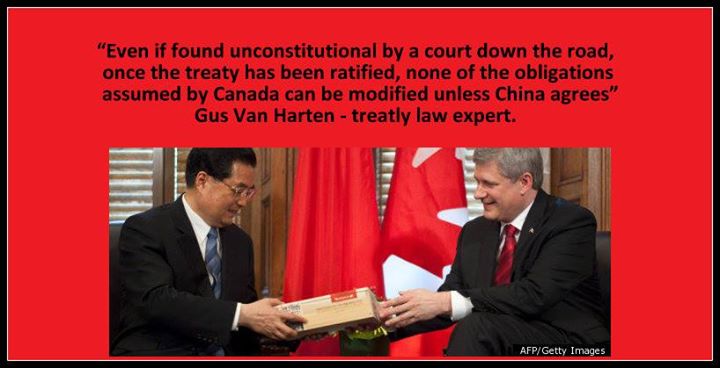 OTTAWA—Canada’s Conservative government is taking heat after Prime Minister Stephen Harper’s cabinet quietly ratified a Bilateral Investment Treaty (BIT) with China after sitting on it for two years during which it was strongly criticized and protested.

It is one of the most controversial investment deals Canada has ever signed, and it comes with a long list of unanswered questions—such as what impact an investment deal with China, a country that does not usually play by the same rules, will have on Canadian investors.

That last point is something the Canadian government has done its best to downplay, going as far as to make misleading claims about the deal, known as the Foreign Investment Promotion and Protection Agreement, or FIPA.

In a statement on Sept. 12 announcing the ratification, Canada’s International Trade Minister claimed the FIPA would “give Canadian investors in China the same types of protections that foreign investors have long had in Canada.”

While there is some truth to the claim, it ignores the punishment inflicted on foreign companies by China’s version of competition law and other policies.

Coincidentally, the U.S. Chamber of Commerce published a report Sept. 9, three days before the Harper government announced that the BIT had been ratified.

The report, “Competing Interests in China’s Competition Law Enforcement,” gives a grim review of how the Chinese regime regulates the business environment in its borders.

“Competition law [in China] is a tool for Chinese policymakers in shaping the ‘socialist market economy,’” it says, which means special provisions for state-owned enterprises, or SOEs.

Under the terms of the BIT, certain laws, like China’s version of anti-monopoly laws, which set foreign companies at a disadvantage, no matter how unfair, are deemed legitimate.

A cornerstone of BIT is that it gives companies from both countries the right to sue the other country in an independent tribunal. The problem, according to critics, is those tribunals usually side with the larger economy, and in this deal, their rulings can be kept secret if China wants it so.

Even in areas where the Canadian companies can sue, some believe it is unlikely they will.

Trade lawyer Todd Weiler, a noted lawyer who represents investors at FIPA tribunals, told Epoch Times that BIT legal challenges are mainly an exit strategy when used in countries like China. They are a way to recoup some investment on the way out of the country.

In other words, companies could challenge punitive and unfair laws, but the threat of retaliation makes winning a moot point.

Critics of the deal also fear China will file its own lawsuits under the BIT and sue the Canadian government if certain laws, like increased environmental regulations, threaten their business.

The U.S. is currently trying to fast track its own BIT with China.

Canada’s deal, which goes into effect Oct. 1, is locked in for a minimum of 31 years. It lets China keep most of its more unfavorable restrictions on foreign companies, so if the U.S. is able to strike a better deal, it will be a major blow to Prime Minister Harper.