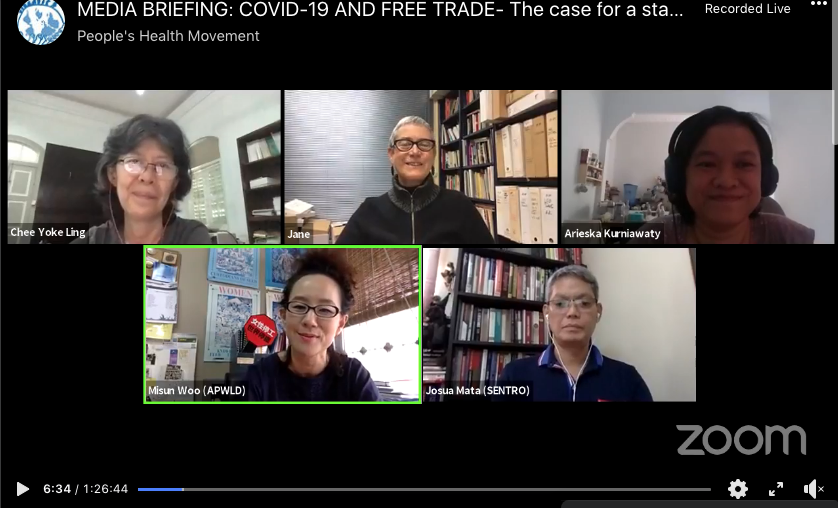 In an online press conference held today, trade unions and civil society organisations from the Asia Pacific have urgently demanded a halt to secret trade negotiations on Regional Comprehensive Economic Partnership (RCEP), a mega free trade agreement between 15 countries in the region. Civil society organisations stressed that countries should concentrate their efforts to tackle the health, economic and humanitarian crisis that has been created by the pandemic. Instead of concluding a new deal ‘virtually’ , governments should review the efficacy of free trade rules in the light of the current situation and release already agreed texts to parliaments and the public.

Peoples’ movement are concerned that RCEP - currently negotiated in secret - could undermine production of more affordable generic versions of life-saving medicines, negatively impact farmers and indigenous peoples rights to seed and food sovereignty, lock-in privatisation of public services, push workers’ wages down and constrain the creation of decent jobs, and restrict the ability of governments to introduce industrial and fiscal policies necessary to protect and regulate in the public interest. In the new post-pandemic reality, these vulnerabilities will be further deepened, marginalising communities even more.

Misun Woo from Asia Pacific Forum on Women, Law and Development (APWLD) opened the press conference by saying, “Several countries in Asia and the Pacific region have now started easing up on their lockdowns. The challenges before them are immense; the pandemic has taken so many lives, wrecked economies, wiping out millions of jobs and livelihoods at a scale never seen before. At this point in time, any economic, fiscal and political decisions must reflect the needs and priorities of the peoples, and a secretive RCEP negotiation is definitely not a priority.”

Talking of the implications of free trade on employment in the context of the economic crisis created by the pandemic, Josua Mata, President of the national trade union center in the Philippines, SENTRO, said, “Supply chains are broken, factories closed, and entire industrial zones are locked-down. As a result workers are struggling to secure their livelihoods in the world’s worst economic recession in 150 years. Governments need to plan the recovery and direct the economy. The crisis has shown the importance of reinstating industrial policy including by localising and diversifying production. Export led growth promoted by RCEP would take us in the exact opposite direction and rob us of policy tools that would revive the economy and create decent jobs.”

Arieska Kurniawaty, Solidaritas Perempuan, Indonesia added, “This pandemic should be a moment for governments to realise that they cannot continue with business as usual. The RCEP, if adopted, will make things much worse for the 420 million small family farms that produce 80% of the region’s food. At this critical time, we have come to realise how much we rely on farmers, peasants, fisherfolks, other food producers, our local market and shorter food distribution networks to get our food. It is not only a matter of trade negotiations, it’s a matter of people’s life and livelihoods. ”

India, which was a negotiating country, has exited the RCEP agreement talks. Explaining this move further, Prof. Jane Kelsey, University of Auckland, New Zealand said, “Japan, Australia and New Zealand were always the aggressors in RCEP on Intellectual Property, services, goods, agriculture, and e-commerce, trying to foist TPPA rules on developing countries and least-developing countries. Their extreme demands put the lie to any pretence this was a development driven agreement. That was what drove India away, depriving them of their main justification for a deal among 16 countries that already have a comprehensive web of agreements between them”.

“Some leaked chapters of RCEP have revealed that the rules in the intellectual property, services, investment and other areas will hamper the ability of RCEP governments to deal with the current and future pandemic and the associated economic crises. All RCEP provisions and commitments need to be urgently reviewed, to ensure that governments will have all the necessary domestic policy space to take relevant actions, today, tomorrow and for years to come,” said Chee Yoke Ling from Third World Network.

Recently, more than 250 organisations wrote to their governments asserting that continuing trade negotiations amidst the on-going pandemic and crisis is a misplaced priority. Further, 94 organisations from the region are demanding the release of RCEP texts. RCEP rules need to be reviewed and re-assessed, as the world enters into a whole new norm after this pandemic. The 15 governments must consider the adverse impact of the mega FTA and put an end to trade agreements such as RCEP as they only increase protection and power of multinational corporations.