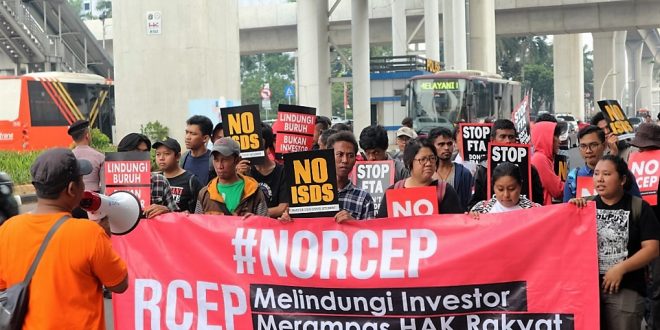 JAKARTA – 10 March 2020: As ministers of the member countries of the Regional Comprehensive Economic Partnership (RCEP) meet for final negotiations over the trade agreement this week, regional lawmakers today expressed concern about the lack of parliamentary and public oversight of the deal, as well as its potential human rights impacts.

The RCEP is a free trade agreement in the Asia-Pacific region that includes the 10 member states of the Association of Southeast Asian Nations (ASEAN), as well as China, Japan, South Korea, Australia and New Zealand. India withdrew from the deal in November 2019.

“During the negotiations, governments have given privileged positions to large business lobby groups, at the expense of public and parliamentary oversight,” said Teddy Baguilat, former Philippine parliamentarian and board member for ASEAN Parliamentarians for Human Rights (APHR). “What’s worse is that they’ve been unapologetic about this double standard, welcoming inputs from businesses while flatly rejecting appeals from civil society to see official documents. The entire process has been an affront to democracy.”

Negotiations for the RCEP have failed the transparency and public participation tests, APHR said. Neither public nor parliamentary oversight have been meaningful, or respected the principle of free, prior and informed consent, lawmakers said.

Among a number of problematic issues in the RCEP agreement, APHR expressed alarm at proposals related to intellectual property rights (IPR), which could have a catastrophic impact on the rights of people living in Southeast Asia.

“Intellectual property provisions in the RCEP threaten access to medicine and public health for hundreds of millions of people across Southeast Asia, by extending patents, likely resulting in rising medicine prices. Access to healthcare is a fundamental human right, and the RCEP must respect this,” Baguilat said.

Despite RCEP members having taken positive steps towards dropping the inclusion of investor-state dispute settlement (ISDS) mechanisms from the agreement, the measures have not been explicitly ruled out, including from future negotiations. ISDS, which allows investors to sue countries for a range of practices, have been widely criticised for undermining national sovereignty, lacking transparency and restricting a state’s ability to respect and ensure their citizens’ human rights.

APHR calls on negotiating parties to officially exclude ISDS mechanisms from all RCEP negotiations as a step towards ensuring the agreement is human rights compliant.

In addition, the rights group is calling on RCEP negotiating parties to conduct open and inclusive public consultations, as well as independent environment, human rights and economic assessments of the agreement, and for up-to-date information regarding the negotiations and texts to be made available to the public and parliamentarians. APHR also reiterates its calls for decision makers to provide balance in their negotiations, rather than continuing to prioritise elements of the private sector.

“The RCEP negotiations have been conducted almost entirely in secret, making it impossible for parliaments and the public to scrutinise whether or not the deal respects human rights and democratic principles,” said Tom Villarin, former Member of the House of Representatives of the Philippines and APHR member. “The current negotiating process bypassess usual checks and balances on the executive. National parliaments must be given the opportunity to review and vote on any agreement before it is signed”.

Furthermore, APHR called on the ASEAN Economic Community to balance its focus on encouraging economic activity with wider obligations to ensure and respect human rights across the region.

“ASEAN’s narrow focus on encouraging economic activity is incompatible with its responsibilities to protect and fulfil human rights,” said Baguilat. “It is time for ASEAN to fulfill its obligation to protect its people’s rights and address economic advancement and prosperity in a balanced and sustainable way.”