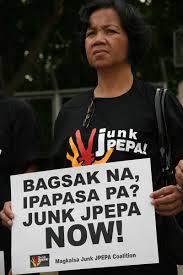 The petition to stop the implementation of JPEPA was filed by the party-list group Akbayan and several non-government organizations under the Magkaisa Junk JPEPA Coalition in October 2008.

The Supreme Court has gone a step closer to resolving a six-year-old petition seeking to stop the implementation of the controversial Japan-Philippines Economic Partnership Agreement (JPEPA).

In a seven-page resolution, the SC, sitting en banc, ordered parties in the case to submit their respective memoranda within a non-extendable period of 45 days from receipt of the notice.

The SC also sought the help of three amici curiae ("friends of the court"), namely retired Justice Florentino Feliciano, Professor Merlin Magallona, and Raul Pangalangan. They were required to submit a memorandum within 60 days from receipt of the resolution.

In a statement, the SC Public Information Office said no oral arguments will be conducted regarding the petition.

Among those required by the SC to be included in the parties’ memoranda are statements of the case, facts, issues, arguments, and reliefs surrounding the issue of the controversial deal.

The SC also required the parties to include a "Table of Authorities," which is a list of the statutes, cases, alphabetically arranged, executive issuances, rules and regulations, and books and articles cited with references to the pages in the memorandum where they are cited.

"Being a summation of the parties’ previous pleadings, the Court may consider the memorandum alone in deciding or resolving this petition," the SC resolution said.

According to the petitioners, the bilateral deal encroached on the power of the legislature because it was signed by the President and concurred in by the Senate, in violation of Article VI, Section 28(2) of the Constitution.

The SC said it wanted to know whether the JPEPA violated environmental laws and treaties to which the Philippines is a party to, as well as exclusions, exemptions, or reservations required under the Constitution and other several laws.

The high court also wanted to know whether the deal violates provisions in the Constitution that ensures marine wealth in the Philippines are used and enjoyed exclusively by Filipino citizens.

The SC also sought to determine whether the JPEPA could be considered as a trade policy founded on equality and reciprocity as envisioned by Article XII, Section 13 of the Constitution.

The petition to stop the implementation of JPEPA was filed by the party-list group Akbayan and several non-government organizations under the Magkaisa Junk JPEPA Coalition in October 2008.

The petitioners asked the SC to issue a temporary restraining order or preliminary injunction enjoining the implementation of the treaty.

The group deemed Article 18, wherein the Philippines assumes the obligation to reduce to zero percent many of the tariff rates applicable to goods imported from Japan, as the most crucial.

They claimed that this provision, being a unilateral act of the executive, overstepped the tariff-setting powers of Congress, as there has yet to be a valid law implementing Article VI, section 28 (2) of the Constitution.

On top of that, the group claimed that the pact will open the floodgates for Japanese toxic waste materials.

The group also warned that the JPEPA would also pave the way for amendment of the constitutional provision against foreign ownership of land. Being an international agreement, the petitioners said the JPEPA will supersede or supplant the Constitution.

In July 2008, the SC voted 10-4 to uphold Malacanang’s invocation of executive privilege in refusing to make a full disclosure of the terms of the JPEPA.

At that time, the high court said that petitioners failed to prove that there was sufficient public interest to overcome the claim of privilege in compelling government to disclose the respective “offers" of Japan and Philippine governments. —KBK, GMA News