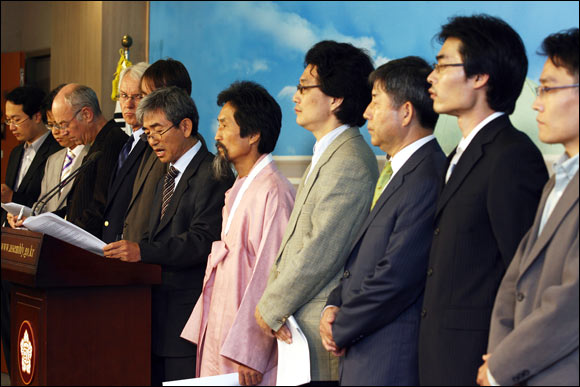 While the 4th ROK-US FTA were in progress in Jeju Island, 101 scholars related to sociology issued a statement, urging the suspension of the negotiations.

“It is clear Korea’s rural communities and farmers will suffer from the greatest damages, since Korean government is exaggerating only the positive influences of the ROK-US FTA without any clear ground”, criticized they government in their statement, “Nevertheless, the government is attributing farmers’ objection to FTA to group egoism, arguing farmers must tolerate losses for national benefit.”

In addition, they noted that “consumers are exposed to serious food danger”, saying that “the ROK-US FTA are highly universal problems directly related to the food safety and sovereignty of all people.”

In conclusion, they argued that government promptly suspend the ROK-US FTA which abandon people’s health, farmers, farm villages and farming under the pretext of economic logic; that government decide whether and when to pursue the FTA according to the will of people after evaluating their social influences sufficiently and examining their results in detail; that National Assembly make the one-sided pursuit of negotiations immediately suspended; and that government and National Assembly reform the systems in general related to food.