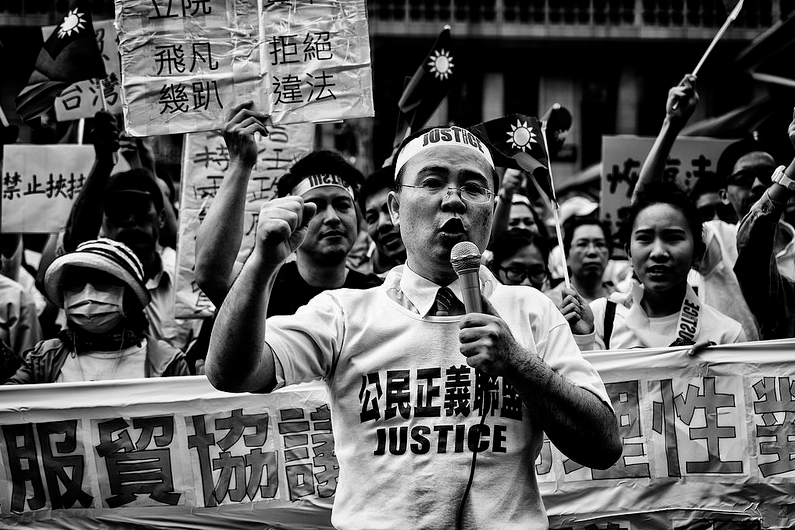 The latest round of Trade and Investment Framework Agreement (TIFA) talks with the US ignores the interests of ordinary citizens, labor activists said yesterday.

Campaigners from the Taiwan Free Trade Investigation, the People’s Supervisory Alliance (人民監督雜碎聯盟) and other groups protested outside of the Ministry of Economic Affairs, the site of yesterday’s talks.

The talks were the ninth round of TIFA talks, aimed at filling out the framework, which was signed in 1994.

The ministry earlier this week said that it would use the platform to express Taiwan’s desire to join the Tran-Pacific Partnership (TPP) being negotiated among Pacific Rim states.

Taiwan Free Trade Investigation member Lee Yuan-chun (李援軍) said that while TIFA talks were aimed at “kickstarting” Taiwan’s bid to join the TPP, the results of past free-trade accords suggest that corporations would benefit at the expense of average citizens. While activists were not opposed to trade agreements, any negotiations should be conducted from the standpoint of furthering the interests of ordinary people, he said.

The government was “railroading” the “secretive” talks through, he said, adding that a previous call for outside opinions had been perfunctory, effectively denying civic groups the opportunity to meaningfully participate.

“Proper procedures have not even been followed, much less negotiating from the standpoint of the people,” labor activist Lu Chih-hung (盧其宏) said, adding that civic groups should have been allowed to play a direct role in drafting Taiwan’s negotiation agenda to counter the influence of business lobbies.

“As long as we negotiate in this fashion, the result will be that the people are dragged along as negotiations are pulled in the direction favoring US and Taiwanese business interests,” he said.

Lu said that many past US demands had focused on requiring Taiwan to change public policy in the name of free trade, citing previous US demands to improve copyright protections and drug patents.

Acceding to US demands would harm Taiwanese consumers by widening the monopoly powers of US drug firms, he said, adding that truly “people-centric” negotiations would focus instead on lower patent fees to cut drug costs.

He also criticized US demands to relax restrictions on foreign media investments and lift the ban on imports of US pork that contain traces of ractopamine, an additive that is banned in Taiwan.

Acceding to the demands would encourage monopolization and create health risks, he said, adding that there would be no way for consumers to completely avoid pork containing ractopamine if the ban were lifted.