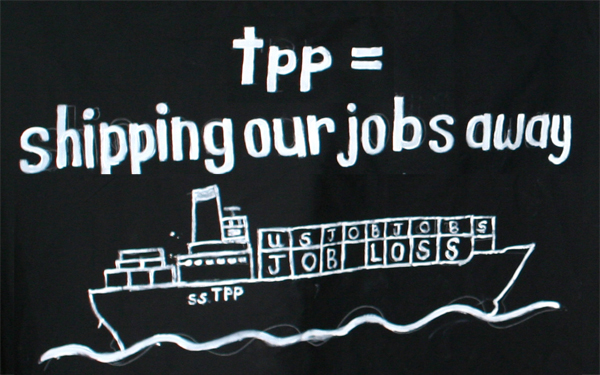 The Trans Pacific Partnership will make it easier for businesses that are based here to move production offshore. That will mean fewer jobs for U.S. workers, and our monstrous trade deficit will expand even more. Trade deficit is the amount of money that we spend for goods overseas minus the amount that countries send to us for purchases of American goods.

Our trade performance worsened as results of most of the past trade deals. With the Bill Clinton’s North American Free Trade Agreement (NAFTA), jobs rushed offshore to Mexican maquiladoras that paid workers about $1.20/hour ( www.corpwatch.org). Now in America, we have no electronics manufacturing, no clothing manufacturing, and no shoe manufacturing.

The U.S.-Korea Trade agreement (KORUS) took effect in 2012. President Obama said that this deal would increase U.S. goods exports by at least $10 billion and support 70,000 U.S. jobs due to the increased exports. It didn’t work that way; there was a decline in exports of 7.5 percent, and imports from Korea increased by $5.6 billion. We lost about 60,000 well-paid manufacturing jobs. ( www.epi.org)

Bernie Sanders has stood in opposition to the almost all free trade bills as job killers. Sanders stands against TPP as well. Hillary Clinton has stated publicly how much she supports TPP, 45 times. (Search "CNN, Secretary Clinton, pushed trade bill 45 times.") But now she has changed her mind.

According to the Federal Register, the Office of the U.S. Trade Representative announced Dec. 28 that it "is seeking public comments on the impact of the TPP Agreement on U.S. employment, including labor markets." Comment period ends Jan. 13, 2016.

Send comments to senators and Rep. Jared Polis, at Bennet.senate.gov and Polis.house.gov.