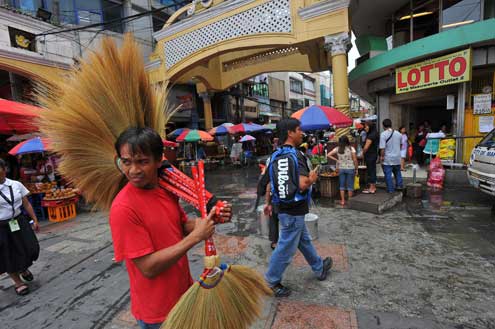 According to the study, the region with the most TTIP losers would be Southeast Asia.

The planned EU-US free trade agreement TTIP holds unexpected opportunities for developing countries, according to a recent study. But while the European Commission has high hopes for the deal, NGOs are warning of a transatlantic "Economic NATO" with devastating effects for the global world order. EurActiv Germany reports.

On Wednesday (21 January), Müller presented a study by the Munich-based ifo Institute for Economic Research covering the effects of the planned Transatlantic Trade and Investment Partnership (TTIP) on developing and newly industrialised countries.

The ifo study, commissioned by Müller three months ago, is meant to establish an "independent basis for discussion" over the global effects of TTIP, the Minister said.

"The trade agreement with the United States offers a unique chance to structure globalisation more fairly. We want to set minimum ecological and economic standards for the entire world," Müller explained.

In the new study, researchers depend on interviews with experts, case studies and particularly on an evaluation of existing published analyses. They refute the concern voiced by numerous critics that TTIP would push smallholders in poorer southern regions further into poverty.

The sheer size of the transatlantic trade relationship could lead to economic competitors in third countries not having a chance anymore, the researchers write. But at the same time, increases in growth in the EU and the United States would considerably increase the demand for goods and services from developing and newly industrialised countries.

With regard to energy feedstocks, the EU imports more from developing countries than the United States, Canada, Japan and China combined.

"With this study we are sending a warning. The effects on developing and newly industrialised countries are relatively harmless. And when it comes down to it, there are winners as well as losers," said the director of the study, Gabriel Felbermayr.

According to the study, the region with the most TTIP losers would be Southeast Asia. Due to TTIP, countries in the region would lose their competitiveness opposite Europe, and the United States would suffer.

While TTIP countries are breaking down their tariff-barriers, tariffs for third countries will stay, the authors write. When companies compete over the same products, those from developing and newly industrialised countries will lose out, the study indicated.

But considering that industrialised and developing countries often produce and trade completely different products for different sectors, the deadweight losses in so-called "losing states" over the course of ten or twelve years would be under 1%.

"In light of annual growth rates of 3-4% such effects seem rather small," said Felbermayr.

The big winners from TTIP are raw materials-producing states as well as countries that are already well-integrated into the value chains of the EU and United States, such as the oil-exporter Brazil, and automotive-exporter Morocco. But here as well, profits would only rarely surpass 0.2% of per capita income.

The director of the study, Felbermayr, called on TTIP negotiators to tweak at the right adjustment screws in the coming months. Only in this way can one speak of creating more equitable globalisation through the agreement.

The EU and the United States must ensure that mutual recognition of transatlantic standards is extended to third countries as far as possible, the study’s director pointed out, and developing countries must be included more in negotiations over new standards. TTIP should not create an "economic NATO", that simply seeks to knock out China in the fight over global leadership, said Felbermayr.

Meanwhile the European Commission sees its actions confirmed by the ifo study.

"The effects of TTIP on the rest of the world are low. We have been saying that for a long time," explained Marc Vanheukelen, Director of the Commission’s trade department (DG Trade) after the presentation of the study in Berlin. The removal of non-tariff barriers within the transatlantic area offers significant growth opportunities for export-oriented companies in third countries, he said.

"With TTIP, in most cases products will only need to be in line with one standard. For exporters to the transatlantic market that will lead to a simplification of life. We might eliminate 50% of non-trade barriers, a big bonanza for third country producers," Vanheukelen chimed.

Development NGOs, on the other hand, are criticising the economic research study. The selection of analysed data is questionable, they claim, especially when it is not even certain yet, what the TTIP text will look like in the end.

"But we do know one thing from experience: bilateral trade agreements always have the effect that third countries are not as well off," said Christa Randzio-Plath, deputy chairman of VENRO, the umbrella organisation of German development organisations.

So far, negotiations have completely overlooked the interests of developing countries, said Randzio-Plath, this must change in the future. At the same time, more concessions must be made for poorer countries in the World Trade Organisation’s Doha Round. "TTIP cannot simply become a nucleus for a new multilateral world order."

The development NGO Oxfam said the study lacks a prognosis over the influence TTIP would have on unequal distribution of income on a global scale, but also within developing countries. The EU’s growth and the United States over the past few decades have aggravated these imbalances, the NGO argues.

"The open question then is, whether and how TTIP could be used to counter this development," said Oxfam’s campaign advisor David Hachfeld. On Monday (19 January), Oxfam published its own study, indicating the distribution of global wealth is becoming increasingly imbalanced.

Uwe Kekeritz, a Green Party MP in the Bundestag, said the ifo study does not come closer to illuminating what the "positive growth effects" for developing countries could look like. Instead of pursuing whether or not growth is inclusive and reaches all parts of the population, Kekeritz said, the study supports the idea that the poor south is constantly reliant on the wealthy north.