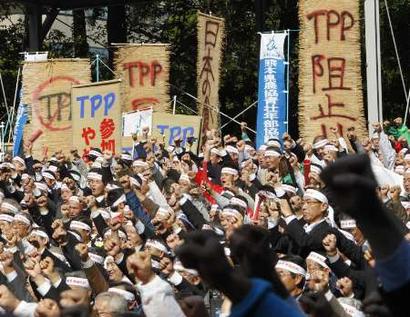 Japanese farmers opposed to the TPP

US negative in excluding rice in trans-Pacific FTA

WASHINGTON (Kyodo) — U.S. Trade Representative Ron Kirk indicated Wednesday in a congressional panel that the United States is unlikely to treat Japan’s rice as an exception in the Trans-Pacific Partnership agreement.

In response to a question by a Republican lawmaker about the exclusion of rice in a free trade agreement between the United States and South Korea, Kirk said, "We will be looking to try to address some of your concerns about rice within TPP and others," suggesting that Washington will seek elimination of tariffs on all products including rice in the trans-Pacific FTA.

In testimony before the Ways and Means Committee of the House of Representatives, Kirk described the TPP as "the world’s most dynamic regional trade negotiating" and said, "We are moving forward to unlock the Asia Pacific through a 21st century trade agreement."

Japan, which plans to decide in June whether it should participate in negotiations to join the regional free trade pact, aims to have politically sensitive products such as rice that are protected by high import tariffs excluded from the TPP amid strong criticism from farmers.

The TPP originated in a free trade agreement among Brunei, Chile, New Zealand and Singapore. Now, negotiations are under way to expand the framework to include five other countries, such as the United States and Australia.

The Japanese government said it will decide whether to join the TPP negotiations around June, but there is strong opposition from farmers who fear they may be hard hit by an influx of cheap agricultural imports.