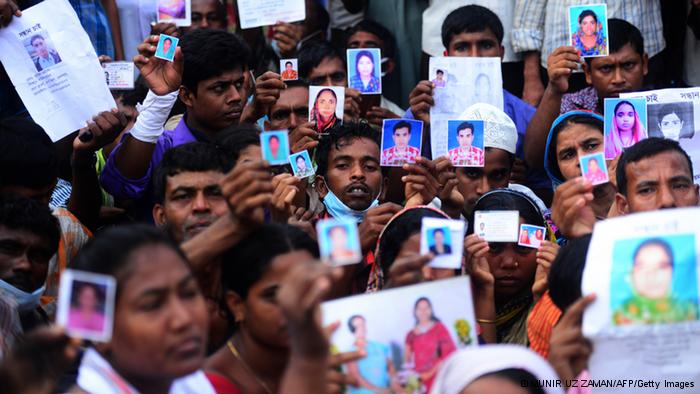 More than a thousand people were killed when the Rana Plaza garment factory collapsed. (AFP/Getty Images)

(Reuters) — President Barack Obama cut off long-time U.S. trade benefits for Bangladesh on Thursday in a mostly symbolic response to conditions in the country’s garment industry that have cost more than 1,200 lives in the past year.

The U.S. move does not directly affect Bangladesh’s multi-billion-dollar clothing exports, since garments are not eligible for U.S. duty cuts. But it could prompt the European Union into similar action, which would have a bigger impact as Bangladesh’s clothing and textiles exports to the EU are duty-free.

"I have determined that it is appropriate to suspend Bangladesh ... because it is not taking steps to afford internationally recognized worker rights to workers in the country," Obama said in a statement.

The government in Bangladesh said it did not expect the move to have an immediate impact on business but feared it would hurt U.S. investment in the country over time.

"We are desperately trying to upgrade the situation of our garment factories and we expect assistance, not punitive action," said H.T.Imam, government adviser to Prime Minister Sheikh Hasina.

The factories came under scrutiny after the collapse of the Rana Plaza garment factory building in April that killed 1,132 people and the Tazreen factory fire in November that killed 112.

"This was not a decision taken lightly," U.S. Trade Representative Michael Froman told reporters. "Our goal, of course, is not only to see Bangladesh restore its eligibility for (the trade) benefits, but to see Bangladeshi workers in safe, appropriate work situations."

Richard Trumka, president of the AFL-CIO labor federation, said the decision sent an important message to countries that receive duty-free access to the U.S. market under the Generalized System of Preferences (GSP) program.

"Countries that tolerate dangerous - and even deadly - working conditions and deny basic workers’ rights, especially the right to freedom of association, will risk losing preferential access to the U.S. market," Trumka said.

"No one will want to wear clothing that is ‘Made in Bangladesh’ if it is made on the blood of workers. It’s time for American industry to show leadership and work with their European counterparts on a global standard for safety."

Suspending Bangladesh from the GSP program will increase U.S. duties on an array of products the country exports to the United States, such as tobacco, sporting equipment, porcelain china, plastic products and a small amount of textile products.

"I wonder why the U.S. government does not ask U.S. buyers to offer us a better price instead of deciding to squeeze us further," said K.M.Iqbal Hossain, general secretary of the Bangladesh Plastic Goods Manufacturers and Exporters Association.

"This will only make things worse for workers even in other sectors." Hossain said taxes for the plastics industry would rise by 10 percent. Bangladesh exports plastic accessories such as garment clips and hangers among others.

The GSP program was created in 1976 to help economic development in the world’s poorest countries and to reduce import costs for U.S. companies.

An EU decision to suspend trade benefits would have far more impact. EU officials raised the possibility of suspension in early May in the hope of prodding Bangladesh into action.

The EU imported roughly 9.2 billion euros ($12.13 billion) of goods from Bangladesh last year, according to data from the EU’s executive branch, the European Commission.

Clothing and textile products ranging from towels and bedding accounted for almost 93 percent of those goods.

EU and Bangladeshi officials will meet in Geneva in July for talks aimed at improving safety conditions in Bangladesh and preserving the country’s trade benefits.

Bangladesh Garment Manufacturers and Exporters Association President Mohammad Atiqul Islam said it was struggling to improve working conditions in the country and hoped for a better judgment from the European Union.

The United States’ own review dates back to 2007, when the AFL-CIO, the main U.S. labor group, first filed a petition asking that Bangladesh’s trade benefits be revoked.

Despite the relatively small volume of trade affected by the U.S. decision, Froman said Bangladeshi officials put great value on remaining in the program.

"We will be staying very much in direct and continuous contact with the government of Bangladesh as they take additional actions on workers rights and workers safety," Froman said. "We’ll review their status at the appropriate time."

European retailers have responded to the two tragedies by signing an agreement to promote worker safety in Bangladesh, but many U.S. retailers have balked at accord, saying it gives unions too much control over ensuring workplace safety.

They have been working instead with former Maine U.S. senators George Mitchell, a Democrat, and Olympia Snowe, a Republican, on an alternative plan to improve fire and safety regulations.

The effort is being coordinated by the Bipartisan Policy Center, a Washington think tank.

"At this point only a few final details remain to be worked out and agreed upon," BPC President Jason Grummet said earlier this week in an email. "We remain on track to complete the process by early July."