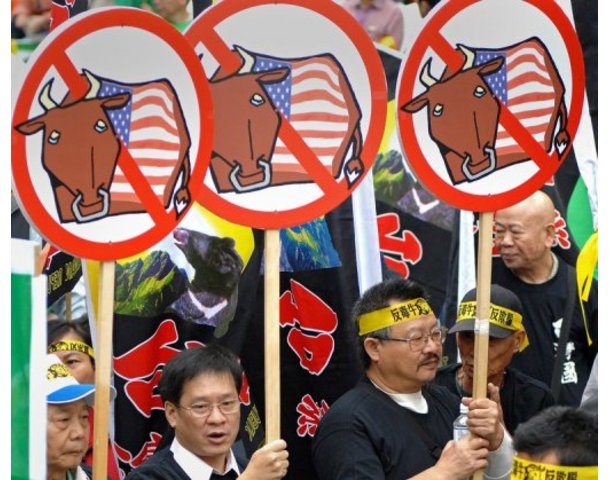 US ties visa waivers to progress on beef exports to Taiwan

Taiwan has been informed that the import ban on US beef products containing ractopamine residue could have repercussions for the nation’s long-standing request to be included in the US visa-waiver program, Deputy Minister of Foreign Affairs Shen Lyu-shun (沈呂巡) said yesterday.

Shen made the remarks at the legislature’s Foreign and Defense Committee in response to questions from Chinese Nationalist Party (KMT) Legislator Chang Hsien-yao (張顯耀).

Shen said the US had expressed concern over the import ban by Taiwan, the six-largest market for US beef exports at US$114.3 million in October last year, according to US Meat Export Federation.

Shen said the US government expected to see progress on the ractopmaine issue before talks on a visa-waiver agreement could take place.

“We aim to separate the beef issue from other bilateral issues and hope that both countries can set aside disputes,” Shen said.

On Wednesday last week, American Institute in Taiwan (AIT) Director William Stanton brought up the issue when he gave a speech at the American Chamber of Commerce’s annual Hsieh Nien Fan dinner, saying that he had been criticized by his bosses in Washington because he was sent to Taiwan “to make the beef problem go away, not to make US beef go away.”

The US postponed a meeting of the Trade and Investment Framework Agreement (TIFA) between the two countries early this year because of the Ma administration’s handling of the beef imports issue, removing products from the supermarket shelves when traces of ractopamine were found.

Urged by the US to allow the use of ractopamine in meat products in accordance with standards adopted by the US and 25 other countries, the Taiwanese government had said it would not revise its zero-tolerance policy unless the Codex Alimentarius Commission (Codex) established standards for trace levels of ractopamine.