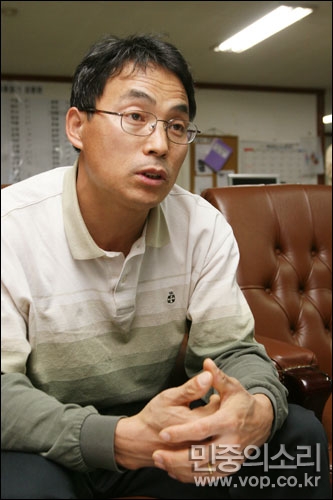 “We all concluded that ’FTA and EPA are just another name of WTO’ in the last La Via Campesina’s meeting. FTA (Free Trade Agreement), EPA (Economic Partnership Agreement) and WTO (World Trade Organization) are essentially the same mechanism that the multinational corporations can exploit the world’s poor people."

La Via Campesina held a meeting in Dijon, the city of France, from Jan. 11 to Jan. 13. Jun Gi-Hoan, General Secretary of Korean Peasants League, said "international solidarity movement against Globalization will expand its path including the struggle against FTA and EPA" in an interview with VOP, after coming back from Dijon.

Why did KCTU attend the meeting?

La Via Campesina is famous for its struggle to stop WTO Ministerial Conference in Seattle (1999), Mexico Cancun (2003) and Hongkong (2005). It describes itself as ’an international movement which coordinates peasant organizations of small and middle-scale producers, agricultural workers, rural women and indigenous communities from Asia, Africa, America and Europe’.

"We joined La Via Campesina in 2003 after fighting with them in Mexico Cancun. Yoon Geum-soon, former leader of Korean Women Peasants Association, is one of the regional Coordinators of East and South East Asia."

Especially, the Korean Confederation of Trade Unions, South Korea’s umbrella labor union, also attended Dijon Conference. Jun said "A lot of labor unions and NGOs as well as peasants organizations attended the meeting; such as ’ATTAC (the Association for the Taxation of Financial Transactions to Aid Citizens)’, ’Focus on the Global South’, ’Seattle to Brussels Network’ and ’Friends of Earth’. It means that Via Campesina will make its anti-Globalization movement from only peasants’ into various unions and NGOs’ movement."

"Searching for the Alternative, Sustainable model."

The major issue of this meeting is the relation between WTO and FTA (and EPA). Jun said that "We all concluded that ’FTA and EPA are just another name of WTO’ in the last La Via Campesina’s meeting. FTA, EPA and WTO are the same mechanism that the multinational corporations can exploit the world’s poor people."

FTA (bilateral agreement) has replaced WTO (multilateral agreement)’s mission to spread Globalization and Neo-liberalism ideology into the world. Why does La Via Campesina come to a conclusion to move into anti-FTA struggle so late? 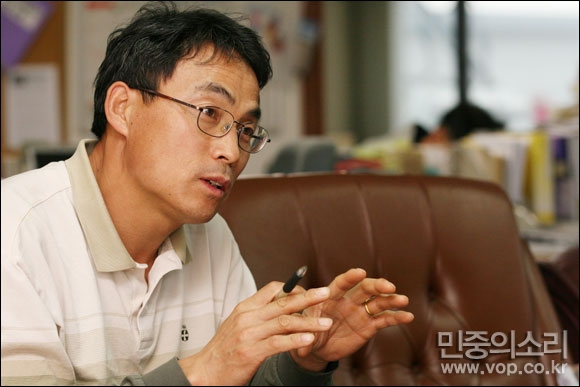 Jun explained that "FTA and EPA are applied to each country in various ways, so we can’t quickly make our movement as international solidarity movement against FTA. We can’t grasp each country’s situation with accuracy."

"We realized that FTA is the same as WTO during our struggle against KORUS FTA, so we had insisted that idea in Via Campesina several times. I think Dijon Conference’s decision to start international anti-FTA movement is very important."

VOP asked him in conclusion "What is the most impressive to you during Dijon’s meeting?" He answered that "the international movements have diverted its ’movement Against WTO and all that’ into ’movement searching for Alternative, Sustainable society model’."

He said "first, a lot of countries such as Mali in Africa, Venezuela, Cuba and Nepal, have made ’rice and food sovereignty’ provision in their Constitution. It is very valuable works. Study on ’ALBA (The Bolivarian Alternative for the Americas) model’ and ’Fair Trade model’ also are under way."

’Searching for Alternative and Sustainable society model’ now encourage the exploited people in the world.