Canada trade deal ruling could further erode Government’s majority
20-May-2022 The Irish Times
The Irish Government could come under further pressure in the autumn with a Supreme Court judgment on a legal challenge to the EU-Canada trade deal expected soon.
New S’pore-Pacific Alliance trade agreement to focus on tech, sustainability
20-May-2022 The Straits Times
Technology and environmental sustainability are among the key issues that Singapore, Mexico, and other Pacific Alliance members are discussing in the context of a new PA-Singapore trade agreement.
Indo-Pacific Economic Framework is not an FTA: 5 things to know
20-May-2022 Nikkei Asia
Tailored pact seeks to counter China’s clout while protecting US workers.
Cambodia, India mulling free trade pact establishment Chea Vanyuth
20-May-2022 Khmer Times
Cambodia and India have accelerated their internal technical work to establish the negotiation for a bilateral free trade agreement.
The US kicks off neocolonialism via Indo-Pacific Economic Framework
20-May-2022 CGTN
The IPEF represents continuity between the colonialist past and neocolonialist present in the Indo-Pacific region.
Panama President aims to restart China trade talks immediately
20-May-2022 Bloomberg
Panama President Laurentino Cortizo said he intends to immediately restart negotiations with China over a free trade agreement, after conversations were put on hold during the pandemic.
A protest is taking place in Salisbury city centre today
19-May-2022 Salisbury Journal
Protestors will be gathering to march to the Rockhopper Exploration headquarters. The company is suing the Italian government for £236 million due to its refusal to allow oil drilling off the Adriatic Coast.
The danger of corporate courts to green transition
19-May-2022 Brig Newspaper
Global Justice Stirling is holding a rally against corporate courts in front of Buchanan Galleries in Glasgow. 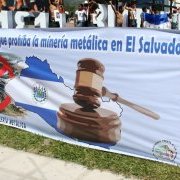 Canadian mining companies keep targeting developing countries in dispute settlements
19-May-2022 National Observer
Canadian mining companies continue to sue developing countries for environmental policies that affect their profitability and often win huge payouts from these poorer countries, a new report states.
Thailand to join talks on US-led Indo-Pacific framework
19-May-2022 Nikkei Asia
This decision to engage in negotiations is not a commitment by Thailand to join the final arrangement, the government said.
Parliament Committee advises MEA to expedite Bilateral Investment Treaties
19-May-2022 The Economic Times
The parliamentary committee of the external affairs ministry has called for fast-tracking signing of bilateral investment treaties.
Colombia has formalized its free trade agreement with the United Kingdom
19-May-2022 SmallCapNews
High-level sources revealed that Colombia has completed all its internal constitutional and legal procedures for the entry into force of the free trade agreement with the United Kingdom.
US picks negotiators for Biden’s Indo-Pacific Economic Framework
19-May-2022 Bloomberg
Sharon Yuan, a veteran of the Treasury Department who worked on the abandoned Trans-Pacific Partnership, has been hired to oversee staff work on the main points of the Indo-Pacific Economic Framework.
What consequences will joining Biden’s IPEF have for S. Korea?
19-May-2022 Hankyoreh
The US-led economic framework is designed to reorganize supply chains around the US — possibly sowing the seeds of conflict with China.
India should keep dairy products out of all free trade pacts: Balyan
18-May-2022 Business Standard
As India plans to sign a slew of Free-Trade Agreements with several countries in the near future, milk and dairy products should never form part of any such trade deal to protect the interest of farmers, minister Balyan said.
Talos Energy pauses Mexico oil arbitration bid amid high-level talks
18-May-2022 Reuters
US-based oil producer Talos Energy has temporarily suspended pursuit of an arbitration claim against Mexico amid high-level talks over one of the country’s flagship offshore projects.
Dairy tariffs renew Canada-US trade spat, threats of retaliation
18-May-2022 National Post
Canada’s refusal to budge on dairy tariffs is whipping up discontent south of the border, and had at least two US industry groups calling on Washington to retaliate.
Spain calls for a quick ratification of EU trade agreements with Chile, Mexico and Mercosur, but what else is needed?
18-May-2022 MercoPress
Spanish foreign minister Jose Manuel Albares called on his EU peers to definitively advance in the ratification of the trade accords of the European Union with Chile, Mexico and Mercosur.
In risky move, UK signals it may scrap Northern Ireland trade rules
17-May-2022 The New York Times
The decision sets Britain on a collision course with the European Union, 18 months after a trade deal that was meant to have completed Brexit.
Europe edging closer to withdrawal from Energy Charter Treaty
17-May-2022 Euractiv
More European Union countries have shown signs of impatience with the ongoing reform of the Energy Charter Treaty, which critics say impedes efforts to phase out fossil fuels, according to leaked diplomatic cables.
0 | ... | 40 | 60 | 80 | 100 | 120 | 140 | 160 | 180 | 200 | ... | 27800
Subscribe to bilaterals.org weekly