No duty concession on 29.8% of India’s product categories under FTA with Australia
6-May-2022 CNBC TV
Some of the products India has kept in the exclusion category without offering any concession to Australia in the Free Trade Agreement include milk and other dairy products, walnut, chickpeas, pistachio nut, wheat, rice, most medical devices, etc.
Government pledges protection for bilateral investors on AfCFTA
6-May-2022 Ghana Web
The Government of Ghana has pledged to protect Bilateral Investment Treaties (BITs) for countries that sign agreement with it for reciprocal foreign direct returns on the African Continental Free Trade Area (AfCFTA).
New round of Kenya-US trade talks starts
6-May-2022 Business Daily
Kenya wanted to do a deal with Washington before the expiry of the Africa Growth and Opportunity Act (Agoa), which allows sub-Saharan African countries to export thousands of products to the US without tariffs until 2025.
Russia’s meandering return path to investing in Africa – OpEd
5-May-2022 Eurasia Review
United States, European Union and their Pacific allies’ sanctions are fast-driving Russia towards Africa. As the sanctions bite, Russia continues stepping up to realign with Africa, stemming its policy with mountainous pledges.
India keeps 1,157 sensitive items out of UAE FTA ambit
5-May-2022 Financial Express
India has kept as many as 1,157 sensitive products from key sectors, including dairy, automobiles, medical devices, consumer electronics and agriculture, out of the purview of its free trade agreement with the UAE.
Ukraine, UK sign preferential trade deal; abolish import duty, tariff quota
5-May-2022 Business Standard
Ukraine and the UK have legally enshrined the abolition of import duties and tariff quotas in bilateral trade by signing an agreement.
Serving of notice of dispute
5-May-2022 Ascent Resources
Amendments to the mining law in Slovenia which prohibit the use of any hydraulic stimulation in mining exploitation constitute further breaches of the protections established by the BIT and the ECT.
My Say: Dubious benefits for Malaysia in ratifying the CPTPP
5-May-2022 The Edge Markets
In this ever-unfolding but unpredictable world and regional situation, Malaysia should remain “non-aligned” — albeit as appropriate for these new times. It should not take sides between the dominant West and its adversaries — led by China, the region’s major trading partner by far.
Malawi, Mozambique sign trade pacts
4-May-2022 Nyasa Times
Malawi and Mozambique have signed two important trade pacts aimed at unlocking and boosting trade of the two countries. President Lazarus Chakwera, signed the two pacts on behalf of the government of Malawi.
African Continental Free Trade Area agreement not quite the silver bullet SA hoped for, says ANC
4-May-2022 Daily Maverick
The African Continental Free Trade Area agreement could have negative impacts on South Africa’s trade, labour force and micro, small and medium enterprises, according to a draft document prepared for discussion at the ANC’s upcoming policy conferences.
The FTA being put on hold worries the Chinese enterprises that intend to do businesses in Maldives
4-May-2022 Raajje
The fact that the China-Maldives Free Trade Agreement has not come into effect causes worries for the Chinese enterprises that intend to do businesses in Maldives, has stated the Chines Ambassador to Maldives.
Biden’s Indo-Pacific Framework: ‘Cloud cuckoo land’
3-May-2022 Inside Sources
Asian and American trade experts characterize the framework as “weak tea,” consisting of “all of the things the US considers important” but little for Indo-Pacific nations in return for their membership obligations.
Govt to seek IPR views from stakeholders for FTAs
3-May-2022 Fortune India
With a handful of free trade agreements (FTA) with key trade partners under negotiation, the Ministry of Commerce and Industry will seek stakeholder views on intellectual property rights (IPR) related issues to firm up its position during such discussions in the coming months. 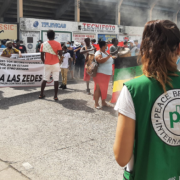 Honduran government repeals ZEDEs law amid warnings of free trade agreement rights and arbitration
2-May-2022 Peace Brigades International Canada
The ZEDEs are free from import and export taxes, but could set up their own internal forms of government, as well as courts, security forces, schools and even social security systems.
Australia-India FTA (Apr 2022)
2-May-2022 Australian Government
India, EU to hold talks on FTA in June, set 2023-2024 target
2-May-2022 The Indian Express
India and the European Union are set to hold an initial round of negotiations on a Free Trade Agreement in June with the aim of concluding an FTA by late 2023 or early 2024, EU Ambassador to India said.
Australia hopes digital trade agreement with India by the year-end
2-May-2022 Business Standard
Australia expects to sign a Comprehensive Economic Cooperation Agreement with India by the year-end, which will include a deal on digital trade that it said will further facilitate bilateral trade.
EU-Mercosur trade deal to clear environmental hurdles this year, EU commissioner says
2-May-2022 Reuters
The European Union and the South American trade bloc Mercosur could by year’s end resolve environmental concerns that are holding up a free trade agreement, EU Commissioner Virginijus Sinkevicius said.
India-UAE trade pact comes into force
2-May-2022 Deccan Herald
The UAE is the second or third largest trading partner of India and that country is a gateway to the middle east, North Africa, Central Asia and sub-Saharan Africa.
Ardern confirms interest in US economic framework
2-May-2022 Newsroom
Speaking to a US business summit, Jacinda Ardern has confirmed NZ interest in a major economic initiative out of Washington while calling on the US to be more engaged in the region on trade
0 | ... | 100 | 120 | 140 | 160 | 180 | 200 | 220 | 240 | 260 | ... | 27800
Subscribe to bilaterals.org weekly