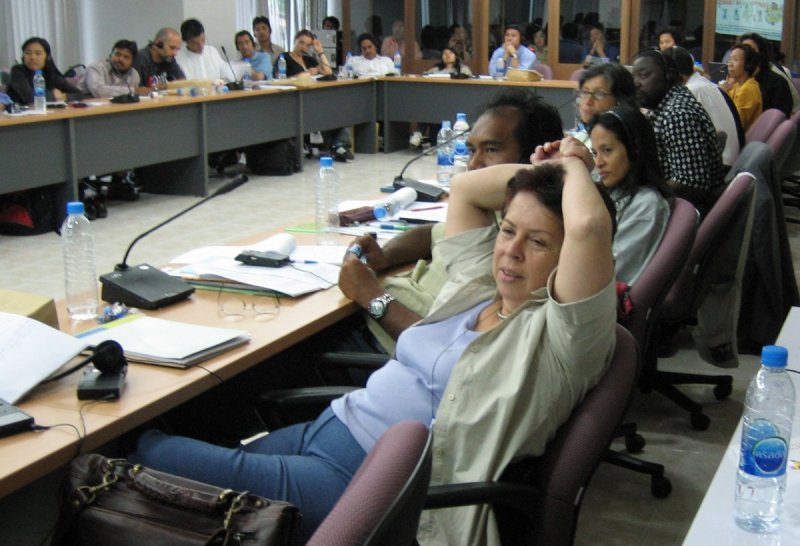 People’s movements have been fighting FTAs ever since the North American Free Trade Agreement (NAFTA) was signed between Mexico, the US and Canada in 1993. Over the years, that fight has multiplied and grown — from Morocco to Korea and from Ecuador to Thailand. To our knowledge, so far only one FTA negotiation process has been stopped as a result of social mobilisation and pressure. In other instances, particularly in Korea, social movements have caused significant disruptions and delays of their government’s FTAs. Still, many grassroots struggles against FTAs and BITs have remained cut off from each other, a direct result of the "divide and rule" logic of bilateralism. FTA Watch, a loose coalition at the forefront of the struggle in Thailand, felt a strong desire to break this logic and share experiences with anti-FTA movements in other countries. It called on bilaterals.org, GRAIN and MSF — all of whom had been involved in global work against FTAs and BITs for many years — to help them organise an international strategy meeting, which was held in Bangkok on 27-29 July 2006.

This workshop brought together, for the first time, movements from many different countries which have been fighting FTAs and BITs. Participation hinged on people who have been directly involved in grassroots struggles to derail these agreements. Nearly 60 participants came from 19 countries across every time zone. Rather than attempting to set up a new network or build a common agenda, the workshop’s objectives were to share people’s experiences fighting FTAs in different countries and to build strategy ideas to strengthen national, regional and international struggles against FTAs.

The Bangkok Post reported on the workshop here and here, while bilaterals.org will be supporting some of the followup-up. More materials from the workshop will be posted here soon.

The Philippine struggle against neoliberal globalization
21-Sep-2006
A PowerPoint file presented at the FTA Workshop in Bangkok on July 28, 2006.
Fighting FTAs: workshop summary report
8-Sep-2006
A summary report of the Fighting FTAs international strategy workshop (Bangkok, 27-29 July 2006)
Fighting FTAs: An international strategy workshop (press release)
11-Aug-2006
On 27-29 July 2006, FTA Watch, GRAIN and bilaterals.org organised a first ever international workshop to make a strategic analysis of people’s struggles against FTAs in Bangkok, Thailand. This press release about the event was shared with Bangkok-based media on 30 July 2006. More materials and information about followup to the workshop will be shared soon.
How the public participate in taking the position and action against FTA?
10-Aug-2006 Media Culture Action against neoliberal globalization
Experiences & strategies for radical communication in (counter) public sphere around Kor-US FTA talk during the 1st half of 2006
Subscribe to bilaterals.org weekly