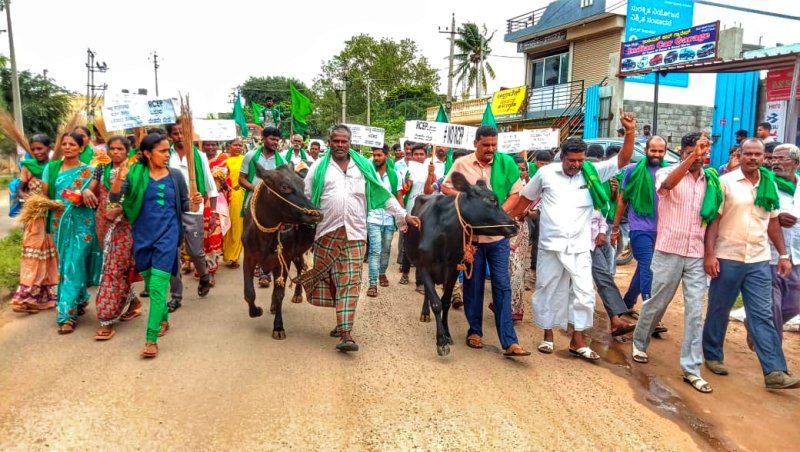 Peasants – including small farmers, artisanal fishers, pastoralists, hunters and gatherers, and urban food producers – are the primary source of nourishment for at least 70% of the world population. However, for decades they have been facing pressure from the political and economic elites of the United States, Canada, Europe, Japan, China, India, Australia and others to liberalise agriculture. The agenda of these governments responds to the interests of transnational corporations, whose power and concentration is growing, while agribusiness alliances with technological and financial giants are being consolidated.

The main arenas in which most of these actors have operated since the late 1980s are the structural adjustment programmes of the International Monetary Fund and World Bank, and the agreements resulting from the Uruguay Round of the General Agreement on Tariffs and Trade, which led to the creation of the World Trade Organisation (WTO). This brought about the reform of agricultural policies, the dismantling of farm subsidies, the liberalisation of prices and investement rules, and the elimination of "barriers" to international food trade. In protest against these policies, which proved dramatic for the peasantry, the Korean farmer leader Lee Kyung Hae immolated himself during the WTO ministerial meeting in 2003.

Bilateral or regional free trade agreements negotiated outside the WTO are an even more aggressive tool. They often include specific chapters on agriculture, as well as other measures that seriously affect agriculture and food. The most problematic elements are the following:

• Undermining of local food systems due to imports. By reducing and eliminating tariffs, free trade deals lead to local markets being flooded bycheaper imports. This harms local producers who cannot compete on equal terms with big businesses. In addition, the most powerful countries continue to subsidise their own agricultural production and continue dumping practices (selling products below their production costs). In this way, they use liberalisation to place their surpluses in the countries with which they sign trade agreements. This is the case, for instance, with the Euroean Union’s Economic Partnership Agreements with African countries leading to dumping of European dairy products.

• Prioritising exports. By definition, free trade agreements drive agricultural production towards international export markets. As a result, food crops get replaced by cash crops. This political push for more industrial agriculture leads to soil and water depletion, creates dependence on commercial seeds and drives increased used of chemical fertiliser and pesticides that are harmful to health and the environment. Labour exploitation is also inherent to this model. International agriculture trade also has a strong impact on climate change. For example, if the trade agreement between the European Union and Mercosur is signed, greenhouse gas emissions generated by the quotas for eight farm commodities alone will increase by 34%.

• Privatisation and land grabbing. Free trade deals consolidate corporate control over land. The North American Free Trade Agreement included clauses that allowed the dismantling of collective lands in Mexico, which was one of the reasons for the indigenous Zapatista uprising in 1994. This legal change promoted land privatisation by agribusiness, leading to the violent evictions of communities. For its part, the Regional Comprehensive Economic Partnership (RCEP) proposes rules on investment and services that facilitate the transfer of land from peasant communities to agribusiness. Companies such as Wilmar and Olam (Singapore), Daewoo (South Korea), and the Beidahuang Group (China) have already acquired hundreds of thousands of hectares of farmland in the RCEP member states. Moreover, the EU-Morocco and UK-Israel agreements allowed for the normalisation of land grabbing in Western Sahara and Palestine.

• Seed privatisation and UPOV. The WTO’s Agreement on Trade-Related Aspects of Intellectual Property Rights (TRIPS) set international rules on private intellectual property rights over seeds. Free trade agreements go further, requiring patents and plant breeders’ rights on all forms of biodiversity. The European Union, the United States, the European Free Trade Association and Japan, among others, demand in a large number of trade negotiations that their partners adopt laws that conform to the standards set by the International Union for the Protection of New Varieties of Plants (UPOV). This demand is also present in the Comprehensive and Progressive Agreement for Trans-Pacific Partnership (CPTPP). Implementing UPOV means criminalising everyday peasant practices such as the free use, conservation, improvement, exchange and distribution of seeds, while consolidating the monopoly power of agribusiness.

• Corporate food safety. Trade agreements represent a central mechanism in the expansion of food safety standards that serve the interests of rich countries and their corporations. For instance, the European Union protects its companies from competition by imposing high health standards. Similarly, the United States requires its trading partners to drop prohibitions against genetically modified foods despite trading partners’ concerns about their health and environmental risks.

• Impacts of e-commerce. The negotiation of the UK–Mexico and Australia–India trade agreements, as well as the CPTPP, among others, are part of a digital trade agenda that benefits corporations such as Google, Amazon, Facebook and Apple. Lack of regulation, loss of control over peasant production data, and difficulties in accessing e-commerce for small businesses are among the main threats to local food systems.

• The Investor-State Dispute Settlement System (ISDS). This is one of the most damaging aspects of free trade agreements. ISDS allows large corporations to challenge public policies that support peasants, local markets, public health and the environment. It also allows foreign investors to gain increased control over land and natural resources, while providing no protections for local communities. For example, the US giant Amway is currently threatening an ISDS lawsuit againt Mexico for pushing ahead with its agrarian reform commitments.

• Environmental deregulation. The relaxation of environmental standards under free trade agreements is presented as an advantage to business. This has precipitated massive socio-environmental devastation in countries like Mexico after thirty years of free trade. Industrial development driven by deregulation is linked to the spillage of various types of waste and toxic chemicals, in addition to pollution from agribusiness. All this has had serious repercussions on peasant agriculture, and constitutes one of the main factors in migration of peasants from the countryside.

Farmers’ organisations, including the international network La Via Campesina, have long been demanding that the WTO stay out of agriculture. They have also been resisting different free trade agreements for years. They say that public policies espousing the principles of food sovereignty can consolidate sustainable and re-localised food systems. They argue that countries should have the right to protect and promote local food production, regulate agricultural markets and develop self-sufficiency. They also call for peasant agroecology and agrarian reform as essential means for sustainable food production to address the climate crisis. This is an important counter-agenda to the free trade regime. 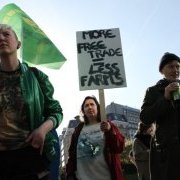 Peasant and farmer organisations in Europe and South America come together against the EU- MERCOSUR Free Trade Agreement
30-Jan-2023 La Via Campesina
Declaration supported by more than 100 peasant organisations, to understand why the EU-MERCOSUR FTA violates the rights of peasant farmers and other people working in rural areas.
Tanzanian farmers mobilize for agroecology, food sovereignty and pan-Africanism
29-Nov-2022 Peoples Dispatch
On November 17-18, over 400 smallholder farmers gathered for the 27th annual meeting of MVIWATA or the National Network of Small-Scale Farmers Groups in Tanzania.
Farmers, seeds & the laws: Importing the chilling effect doctrine
24-Nov-2022 South Centre
The UPOV-based Plant Variety Protection laws, favoured by developed countries, and often pushed through bilateral or regional trade agreements, regulate farmers’ interactions with seeds in many countries.
Corporate concentration: Agri-food giants dominate global food chain more than ever, report warns
23-Sep-2022 Food Ingredients First
Over the past 40 years, the study underscores that the largest agrochemical firms have used intellectual property laws, mergers and new technologies to take control of the seed sector. 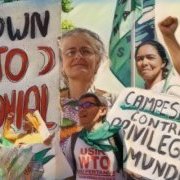 10 September 2022 | International day of action against the WTO and FTAs
7-Sep-2022 La Via Campesina
Every year, on 10 September, all the members and allies of La Via Campesina mobilize against the destructive policies that are forced upon the small-scale food producers through bilateral, regional and multilateral trade agreements. 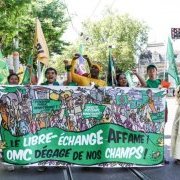 “DOWN DOWN WTO!” – Peasants agitate against the 12th Ministerial Conference of WTO
13-Jun-2022 La Via Campesina
During the demonstration, peasants denounced the policies that the WTO has promoted in various countries, that has impoverished and displaced rural families through countless free trade agreements. 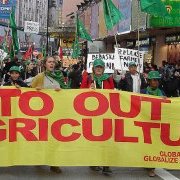 More free trade will not solve the food crisis
8-Jun-2022 Al Jazeera
WTO has lost the trust of the people, and all governments must keep agricultural matters out of free trade agreements. 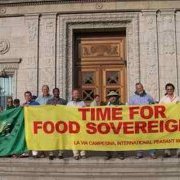 Statement on the transnational consequences of the war in Ukraine on food insecurity in many African countries
16-Mar-2022 afrique-europe-interact
No to the free trade regime! Solidarity-based practice for a right to food sovereignty! Strengthen local, small-scale agriculture! Actively prevent hunger crises! WTO waiver 2.0! 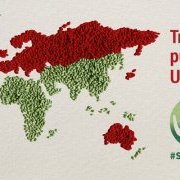 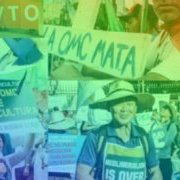