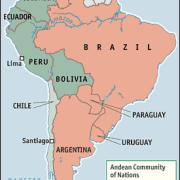 Pisco sour
26-Aug-2006 The Economist
Little by little, South America is dividing itself into two very different trade blocks. Mercosur, based on Brazil and Argentina and recently joined by Venezuela, is relatively protectionist and suspicious of bilateral trade deals with the United States. Most countries on the Pacific seaboard are committed to free trade with both el norte and Asia.
A bridge between Asia and South America
25-Aug-2006
In the last few months, Chile has made it clear that it intends to become a trade platform between the vast Asia Pacific region and the Andean countries, by means of trade treaties and political integration. Prompt re-entry into the Andean Community of Nations (CAN) would be a step in that direction.
Chile formally requests incorporation to CAN
24-Aug-2006
Chile formally requested incorporation to the Andean Community of Nations, CAN, in a letter sent by President Michelle Bachelet to her counterparts from Bolivia, Ecuador, Colombia and Peru, reported Foreign Affairs minister Alejandro Foxley.
0 | ... | 160 | 180 | 200 | 220 | 240 | 260 | 280 | 300 | 320 | ... | 340
Subscribe to bilaterals.org weekly