CAFTA implementation leaves some countries hanging by a thread
3-Jul-2006
While the machines on the factory floor whirred rat-a-tat-tat, textile maker Sergio de la Torre sat in his office and extolled what CAFTA will bring in the future: attention and foreign investment.
Guatemala joins trade agreement
3-Jul-2006
A free-trade agreement with Central America inched closer to completion with the announcement that Guatemala will join three nations already in the pact today.
Guatemalans Occupy Farms Rejecting FTA
3-Jul-2006
Guatemalan farmers occupy Sunday six state farms in the country’s north and eastern regions for three consecutive days, protesting against the Free Trade Agreement (FTA) with United States.
Lift the Veil of Secrecy on Stalled Central America Trade Deal, Demands Civil Society
28-Jun-2006
The Tory government says a free trade agreement with Central America, on ice since 2004, will eventually be debated in the House. One academic doesn’t mind the delay, worrying the deal could be bad news for some nations, while industry officials worry Canadian firms may lose interest before the deal is reached. Once it’s done, Canada-Central American Free Trade Agreement will be debated in the House of Commons, Conservative MPs said last week, but there are no guarantees draft agreements will be available to civil society organizations or other third parties.
CAFTA threatens small farmers
20-Jun-2006
Three times a week, Julian Mux walks two hours from his small parcel of land in the Guatemalan highlands to the nearest road, carrying just-harvested miniature zucchini that will end up in U.S. supermarkets.
Guatemalan bishop: Free trade widens gap between rich, poor
14-Jun-2006 Catholic Online
Free trade under the current economic rules can only widen the gap between rich and poor in the Americas, said the head of the Guatemalan bishops’ conference.
Colombia kicks off free trade talks with 3 Central American countries
6-Jun-2006 AP
Colombia, fresh from reaching a free trade agreement with the United States, is now trying to eliminate trade barriers with Central America.
Agreement comes down to the wire
2-Jun-2006 Embassy Magazine
The Canadian government is facing demands to disclose a draft free trade agreement with four Central American nations currently in the final stages of deliberation behind closed doors.
Guatemala: Fears and hopes raised by free trade with US
22-May-2006 IPS
With just a few days to go before the removal of trade barriers between Guatemala and the United States, social organisations are afraid that living standards in Guatemala will decline, while the government and the business community predict an influx of investment, economic growth, and the creation of thousands of new jobs.
Guatemala anti-FTA vigil grows
12-May-2006 Prensa Latina
More popular organizations have joined the on-going vigil in front of the Guatemalan Constitutional Court, where a bill against the free trade agreement with the US is being discussed Thursday.
Guatemalan orgs: No US FTA
11-May-2006 Prensa Latina
The COS (Social Organizations Group) and the MISPEC (Guatemalan indigenous, farmer and popular movement) have joined the vigil Wednesday in front of the Guatemalan Constitutional Court to reject the free trade agreement with the United States.
FTA keeps Guatemala minister in dock
6-May-2006
The Guatemalan Congress began its second day of questioning Economy Minister Marcio Cuevas Thursday, on the basis and effects of the free trade agreement with the United States. 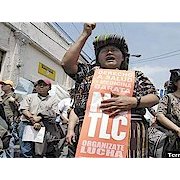 Guatemala: Between the sword and impotence
27-Apr-2006 Granma
As during the crudest times of interventionism in banana republics, James Derham, US proconsul in Guatemala, snuck into a session of Congress on April 18 to pressure legislators to approve — now! — a complimentary law being demanded by the United States so that the country definitely enters into a Free Trade Agreement.
US-FTA blocks medicine for many
24-Apr-2006
The Guatemalan pharmaceutical industry is the strongest company in Central America and among the first 10 in Latin America, but it is today threatened by the free trade agreement (FTA) with United States.
US pushing FTA on Guatemala
20-Apr-2006 Prensa Latina
US ambassador in Guatemala James Derham appeared in Congress Wednesday to pressure for approval of complementary laws to the Free Trade Agreement (FTA).
US-Guatemala FTA unconstitutional
6-Apr-2006 Prensa Latina
The free trade treaty between US and Guatemala is unconstitutional and violates everything from the principle of equality of enterprises to working rights, declared Guatemalan attorney Ramon Cadenas Wednesday.
Colombia and Guatemala plan free trade talks in June
28-Mar-2006 Bloomberg
Colombian President Alvaro Uribe said in January the South American nation would negotiate free trade agreements with Guatemala and El Salvador. 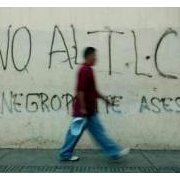 Guatemalan court examines FTA appeal
20-Mar-2006 Prensa Latina
Guatemalan organizations described the Constitutional Court ruling to give leave to an appeal against a free trade agreement (FTA) with the US as a firm step to defend the nation’s interests.
Guatemalans march against US FTA
25-Feb-2006 Prensa Latina
Hundreds of union members, farmers, women, indigenous and representatives of other Guatemalan sectors marched in front of the US Embassy Friday chanting "No to the TLC" (Spanish for FTA).
Guatemala youth join anti-FTA rally
16-Feb-2006
Guatemalan young people announced Thursday their willingness to join the massive February 24 march scheduled against the Free Trade Agreement (FTA) with the US in Guatemala City.
0 | 20 | 40 | 60 | 80 | 100
Subscribe to bilaterals.org weekly