African mega-treaty ’to funnel free-trade fortunes into SA’
14-Jun-2011 SAPA
The planned creation of a 26-nation African Tripartite Free Trade Area (FTA) will draw industrial investment to South Africa by making it a springboard for low-duty access to other parts of the continent, trade and industry director general Lionel October said on Monday.
FTA to expand market for Zimbabwe goods - Ncube
11-Jun-2011
Industry and Commerce Minister Welshman Ncube says if negotiations for the Common Market for East and Southern Africa - East African Community - South African Development Corporation Tripartite Free Trade Area (FTA) are successfully completed, Zimbabwean goods and commodities will find greater markets on the continent.
Tripartite FTA is key to dismantling the ‘spaghetti bowl’
8-Jun-2011
On Sunday, heads of state and government from Africa’s three main regional blocs – the Southern African Development Community, the Common Market for Eastern and Southern Africa and the East African Community – will meet in South Africa to launch negotiations for a Tripartite Free Trade Area (T-FTA).
Free-trade deal ‘hinges on deeper integration’
8-Jun-2011
A trade expert yesterday warned that vested interests and policy differences in the East Africa and Southern African region could derail a bid to create a free-trade agreement among 26 countries unless there was enough "political stomach for deeper (regional) integration".
T-FTA: Devil is in implementation
4-Jun-2011
Success of the grandiose Tripartite Free Trade Area will largely depend on how geared members of COMESA, EAC and SADC are to swiftly implementing agreements and trade protocols.
Services: to liberalize or not?
31-May-2011
The Southern Africa Development Community and the Common Market for East and Southern Africa are currently in the process of liberalizing trade in services.
Need to tighten RECs
23-May-2011
In the inaugural tripartite summit held in Kampala, Uganda in October 2008, our heads of state and government made a number of decisions, one of which was that the 26 countries that make up the COMESA-EAC-SADC tripartite should speed up the process of integration as outlined in the Lagos plan of action and as articulated by the continental body of the African union commission.
China-SADC investment forum held in South Africa
23-May-2011
China, South Africa’s leading trade partner which has been in the past focusing its investment interests in the country’s mining and manufacturing sectors will soon "diversify" to other economic sectors and industries promoting job creation in South Africa, the Chinese investment body revealed Thursday.
Tripartite FTA summit in June
5-May-2011
The first summit of the envisaged Tripartite Free Trade Area (T-FTA) will be held in South Africa on June 12 where a specific roadmap and timetable for implementation of the expanded economic grouping will be announced.
Tripartite Free Trade Plan May Repeat Previous Mistakes
23-Apr-2011
With regional wheels rolling to put in place the envisaged grand tripartite free trade area (FTA), questions have arisen about whether it would be viable and increase competitiveness.
EPAs are bad for Africa
23-Apr-2011
The position taken by Namibia with regard to the signing of the Interim Economic Partnership Agreement (EPA) is commendable and should be a guiding principle for further negotiating trade agreements between Africa and the rest of the world.
EPA negotiations on backburner
18-Apr-2011 Southern Times
Negotiations for a new economic partnership agreement (EPA) between SADC members and the European Union appear to have been shelved with no fixed date for resumption of the protracted trade negotiations.
SA to host SADC-Comesa-EAC free trade agreement summit this year
6-Apr-2011
Before mid-year South Africa would host the next summit on the establishment of a Trilateral Free Trade Agreement (T-FTA) among the regional economic groupings of the East African Community (EAC), the Common Market for Eastern and Southern Africa (Comesa), and the Southern African Development Community (SADC).
Negotiations for Africa free trade area to start by mid-year – Davies
9-Mar-2011
Negotiations for a tripartite free trade area (FTA), which would include 26 East and Southern African member states, were expected to begin by mid-year, Trade and Industry Minister Rob Davies said on Tuesday.
Implementation challenges will haunt Grand FTA
8-Mar-2011
Implementation challenges and barriers to trade liberalization currently dogging SADC’s Free Trade Area (FTA) will continue to haunt member states in the implementation of an ambitious grand FTA encompassing COMESA, EAC and SADC.
SADC urges more intra-trade
4-Mar-2011
The Southern African Development Community (SADC) has appealed to its members to increase intra-trade in Africa. 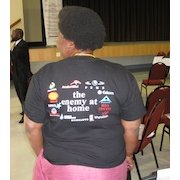 Southern Africa: A region of winners and losers, not partners
1-Mar-2011 IPS
Critics want southern Africa to look at Latin America’s Bolivarian Alliance for the Peoples of Our America (ALBA) as an approach to achieving regional economic integration based on fulfilling basic human needs and the services that are required to meet them instead of trade liberalisation with the EU, within the BRICSA group (Brazil, Russia, India, China and now South Africa) or within the region itself.
COMESA FTA deal in final stages
28-Feb-2011 E African Business Week
As the Common Market for Eastern and Southern Africa (COMESA), East African Community (EAC) and Southern African Development Community (SADC) continue to integrate their economies, countries are now subscribing to the block’s trading area in order to attract investment.
South Africa pushes for new African FTA
23-Feb-2011 Bua News
South Africa is pushing ahead to secure a free trade agreement between the Southern African Development Community (SADC), the East African Community (EAC) and the Common Market for East African States (Comesa).
Angola, DRC slow down FTA
21-Feb-2011 Southern Times
The SADC Secretariat has achieved little progress in getting Angola and the Democratic Republic of Congo to joining its trade liberalisation process, the Free Trade Area, which has been in existence for nearly three years now.
0 | ... | 60 | 80 | 100 | 120 | 140 | 160 | 180 | 200 | 220 | ... | 300
Subscribe to bilaterals.org weekly