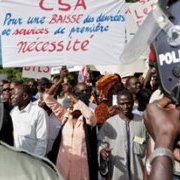 EU agrees trade deals with Africa
24-Nov-2007 Al Jazeera
The European Commission and four states in southern Africa — Botswana, Mozambique, Swaziland and Lesotho — have reached a new trade deal. South Africa and Namibia "will determine their participation in the agreement in the coming days," the Commission said. Madan Murlidhar Dulloo, foreign minister of Mauritius, accused the EU of "divide and rule".
Southern African free trade zone to come up next year
12-Nov-2007 Earth Times
The Southern African Development Community (SADC) has said that a free trade agreement (FTA) for the region will be concluded next year as scheduled.
Response to the letter “This is not a poker game” by Messrs Peter Mandelson and Louis Michel in The Guardian of 31 October 2007
9-Nov-2007
You are right that this should not be a poker game. Maybe it’s time for reflection so you could realize who is actually playing poker with the livelihoods you are trying to help, writes Wallie Roux.
SAfrica won’t ’roll over’ on services trade with EU
14-Oct-2007 Reuters
The European Union needs to scale down its ambitions for accessing the service sector in southern Africa as it negotiates an economic partnership agreement (EPA) with the region, said South Africa’s deputy trade minister Rob Davies.
Draft EU-SADC EPA (EU proposal, June 2007)
22-Sep-2007
Roux still in limbo
15-Sep-2007 Namibia Economist
The fate of the Meatco researcher, who got suspended for expressing a sceptical opinion on the EU-SADC Economic Partnership Agreement negotiations in May, is yet to be decided.
South Africa: SA ’not in a hurry’ to sign EPA, says EU
31-Aug-2007 allafrica.com
As the December deadline for the signing of a European Union Economic Partnership Agreement (EPA) with Southern Africa Development Community (SADC) member countries fast approaches without any sign of the deal being closed by then, European Union (EU) representatives in SA are growing frustrated and accuse Pretoria of procrastination over the negotiation.
EU-SADC EPA: Frustration between EU and SA boils to the surface as trade deadline looms
31-Aug-2007 Engineering News
Frustration is mounting in relations between the European Union and South Africa, in particular, in negotiations for an economic partnership agreement between the EU and the so-called Southern African Development Community group, comprising Angola, Botswana, Namibia, Lesotho, Tanzania and Mozambique.
Tanzania will rue the cost of starting with SADC
20-Aug-2007 East African
With the partner states of the East African Community having agreed to negotiate an Economic Partnership Agreement (EPA) with Europe under one roof, Tanzania may be forced to count the cost of forgoing a relatively successful regional grouping in East Africa against political solidarity with Southern Africa’s regional power base — South Africa.
0 | ... | 120 | 140 | 160 | 180 | 200 | 220 | 240 | 260 | 280 | 300
Subscribe to bilaterals.org weekly