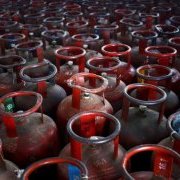 TT signs UK trade agreement
1-Apr-2019 Newsday
One week after nine Cariforum countries signed an agreement with the United Kingdom to maintain preferential trade agreements if and when the UK leaves the European Union, Trinidad and Tobago also signed on to the agreement.
Realigning trade alliances
23-May-2011
With the demise of the Free Trade Area of the Americas, a realignment of trade alliances is evident in the hemisphere—witness ALBA, Petro Caribe, expanded Mercosur. In the aftermath of the Lome Convention between the European Union and its former colonies of Africa, Caribbean and the Pacific, the age of preferential trade agreements came to an end and the era of reciprocal trade was born.
TT, DR need to ramp up trade
17-Sep-2009
Business people in the Dominican Republic and Trinidad and Tobago are being urged to aggressively identify and pursue opportunities in each other’s market as the global environment becomes more challenging.
T&T eyes Canada trade deal
12-Aug-2009 Trinidad & Tobago Express
Despite the controversies associated with the negotiation of the Economic Partnership Agreement (EPA), permanent secretary in the Ministry of Trade and Industry, Carl Francis, says Trinidad and Tobago will be better off in the area of trade once it joins forces with Canada.
Labour unions in Trinidad and Tobago prepare for economic shutdown
26-Aug-2008 Caribbean Net News
Labour unions in Trinidad and Tobago are gearing up for a nationwide shut down of the country on September 8. They are protesting rising crime, uncontrollable food prices and increasing violence in the country, and calling for Trinidad and Tobago not to rush into signing the Economic Partnership Agreement (EPA).
FTAA vs ALBA - Choosing trade routes
21-Jun-2008 Newsday
Even as the FTAA cools on the back-burner and Venezuela President Hugo Chavez pitches ALBA as a viable trade alternative, there are concerns that ALBA may not suit Trinidad and Tobago’s palette. 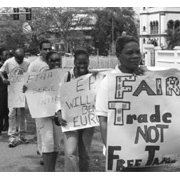 Anti EPA groups protest at White Hall!
17-Jun-2008 St Lucia Star
On Thursday June 12, organizations from around the region staged a protest against the EU-Caribbean Economic Partnership Agreement in front of White Hall, the prime minister’s office in Trinidad.
’...Agreement harmful to small producers’
9-Jun-2008 Trinidad & Tobago Express
Calling for a re-negotiation of a new Economic Partnership Agreement, Federation of Independent Trade Unions and Non Governmental Organisations president David Abdulah says aspects of the agreement could prove to be harmful to the people of Trinidad and Tobago and the Caribbean.
Trinidad and Tobago to sign EPA
9-Jun-2008 Caribbean Net News
Trinidad and Tobago is expected by the end of July 2008 to sign the Economic Partnership Agreement (EPA) between CARIFORUM and the European Union along with its regional counterparts.
Ramphal pleads for more equity in EPA
27-Mar-2008
Sir Shridath Ramphal yesterday made a strong plea to the European Union (EU) for "greater equity" in the Economic Partnership Agreements (EPAs) being negotiated with the African, Caribbean and Pacific (ACP) countries and, specifically, the one to be signed this coming June with the Caribbean Community and the Dominican Republic.
EPA - the MAI in disguise?
15-Jan-2008 Trinidad Express
In the late 1990s, Europe attempted to impose investment conditions and policies under the Multilateral Agreement on Investments (MAI) which was shot down by the anti-MAI campaign supported by the developing countries. It appears to have achieved much of the same through the Caribbean Economic Partnership Agreement.
Rethinking FTAA
8-Apr-2007
Trinidad and Tobago should rethink its position on the Free Trade Area of the Americas (FTAA) and instead examine Latin American proposals on the formation of a Latin American-Caribbean trade grouping. Government, it seems, continues to believe that we can still be selected as the headquarters of the FTAA.
India, Trinidad & Tobago sign bilateral trade agreement
13-Mar-2007 Zee News
India and Trinidad & Tobago on Monday signed the Bilateral Investment Promotion and Protection Agreement (BIPPA) aimed at enhancing investment and technology flows between the two countries.
Indians can chase Mittal dream in Trinidad
13-Nov-2006 Hindustan Times
Indian entrepreneurs will soon be able to follow the story of millionaire Lakshmi Mittal who hit success by buying an ailing steel firm in Trinidad 17 years ago.
T&T, Mexico investment treaty signed
6-Oct-2006 Trinidad Express
Trinidad and Tobago yesterday concluded the negotiation of its "fastest ever bilateral investment treaty" with another country, in this instance Mexico, Trade and Industry Minister, Ken Valley revealed.
Trinidad and Tobago to sign investment treaty with Germany
15-Feb-2006 Caribbean Net News
Last week, representatives from both governments met in Port of Spain to conclude the negotiations for a bilateral treaty for the encouragement and mutual promotion of investments.
Europe: support for change carries agendas
22-Jan-2005 Trinidad & Tobago Express
As 2005 proceeds, some Caribbean nations may find themselves faced with an unusually specific strategic choice: Europe may suggest the need to consider the relative weight they intend to give to the development of sectors such as tourism in preference to the role presently afforded to traditional agriculture.
T&T: Parliamentary OK for trade pacts
11-May-2004 Parliamentary OK for trade pacts
Trinidad & Tobago’s Constitution has to remove from the Executive the power to make unilateral decisions on trade and investment.
Canada-Trinidad and Tobago BIT (1996)
24-Mar-2004
US-Trinidad & Tobago IPR Agreement (1994)
20-Mar-2004
0 | 20
Subscribe to bilaterals.org weekly