Blow to UAE-US FTA hopes
1-Jul-2007 Khaleej Times
The June 30 expiration of the Trade Promotion Authority (TPA), which allowed the Bush administration to negotiate trade agreements that cannot be amended by Congress, has shattered all hopes of a revival of the stalled US free trade negotiations with the UAE and other GCC countries.
Shaukat for early signing of FTA with GCC
12-Jun-2007
Prime Minister Shaukat Aziz has emphasised the need to expedite the process of signing a free trade agreement (FTA) between Pakistan and the Gulf Cooperation Council (GCC), saying that the attractive demographics of Pakistan have created growing economic opportunities.
Japan-UAE joint economic committee set up
29-Apr-2007
President His Highness Shaikh Khalifa Bin Zayed Al Nahyan and visiting Japanese Prime Minister Shinzo Abe expressed their firm determination to develop bilateral relations between the UAE and Japan at all levels.
GCC on course to meet 2010 monetary union deadline
27-Apr-2007
The Gulf Cooperation Council (GCC) is on course to meet a 2010 deadline to form a monetary union, the UAE Central Bank Governor, Sultan bin Nasser Al Suwaidi, said yesterday. "There is no delay to forming a currency union," he said, speaking to reporters on the sidelines of an Islamic Banking Conference held in Dubai.
India, UAE amend DTAA, sign other pacts
26-Mar-2007
Keen to boost their trade and economic ties, India and the UAE today revised their agreement on Double Taxation Avoidance and signed a pact for exchange of information between the stock exchange regulators.
US, UAE say still hope to reach free trade deal
12-Mar-2007
The United States and the United Arab Emirates still hope to reach a free trade agreement and plan to resume talks whenever the White House wins new "fast-track" trade negotiating authority, officials from both countries said on Monday.
US says FTA with UAE off for now
10-Mar-2007 Gulf Daily News
US trade officials said yesterday they would not finish free trade talks with the UAE by a deadline at the end of this month. Investment is one issue that negotiators have failed to find agreement on. 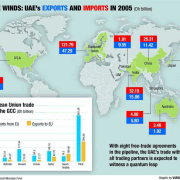 Trade deals to position UAE as economic hub
24-Feb-2007 Zawya
The UAE is negotiating eight free-trade agreements with key economic blocks that will have an impact on trade worth Dh388 billion, according to 2005 figures, and cement the country’s position as the economic hub of the Middle East.
Envoy says FTA talks to continue
21-Feb-2007 Gulf News
The UAE and the United States have confirmed that the negotiations for a Free Trade Agreement (FTA) will continue, officials said. "The talks are not suspended. What happened is that the documentation will not be ready by the March 31 deadline," US Ambassador Michele J. Sison told Gulf News yesterday.
US-UAE FTA on ice
19-Feb-2007 AME Info
Talks between the US and the UAE over a free trade agreement have been suspended after both parties failed to agree on how the Gulf state would open up its markets to US investors and banks. The FTA will now miss the March 31 deadline.
US, Emirates seen getting closer to free trade pact
15-Feb-2007 Business Times
Major sticking points still obstruct a deal, including Washington’s insistence on improvement of labourers’ rights and the country’s overall human rights record.
UAE/US free trade discussions limp on
12-Feb-2007 Arabian Business
Stop-start free trade talks between the UAE and the United States are making progress, according to the UAE Ministry of Finance and Industry. The Ministry did not comment on reports that the UAE’s record on human rights and the banning of labour unions are obstacles.
UAE weights price of trade pact with US
4-Feb-2007 ANTARA
The United Arab Emirates is mulling whether to make political concessions to the United States in a free trade pact that has eluded both countries for nearly two years.
UAE free trade agreement with US at risk
16-Jan-2007 AXcess News
Free trade negotiations between the United Arab Emirates (UAE) and the United States is at risk of unraveling if an agreement can not be reached next month, UAE government officials said Monday. US oil and gas exploration and development companies stand to lose billions if the Bush administration cannot work it out in time.
Indo-Arabic economic bloc mooted
8-Jan-2007 Economic Times
The UAE has proposed an Indo-Arabic economic bloc with a view to ensure prosperity and growth over the long term for the two sides.
US-UAE free trade deal in limbo
6-Jan-2007 Gulf News
The Bush administration needs to wrap up a deal with the UAE by late March to get it through Congress before its "trade promotion authority" expires at the end of June.
Some hope for US-UAE trade deal
6-Jan-2007 Trade Arabia
A free trade deal between the US and the UAE is still possible, even though talks fell off track last year, a US business leader said.
UAE and Egypt aim to increase trade
7-Dec-2006 Gulf News
"We do not need a free trade agreement with the UAE as there is already the Pan-Arab Free Trade Agreement (PAFTA), which we will implement," Prime Minister Dr Nadeef said. PAFTA is an agreement to establish a pan-Arab free trade area by 2008.
Dubai Chamber says Jordan is a potential market for UAE
11-Sep-2006
The Dubai Chamber of Commerce and Industry (DCCI) said that Jordan is a potential market for the UAE, and the UAE could win a good chunk of Saudi Arabia’s trade with Jordan.
US: No plans to begin new trade talks
25-Aug-2006
The United States has no plans to begin new bilateral free trade negotiations with other nations, and will focus on successfully concluding the four it is actively pursuing, Washington’s top trade envoy said Friday.
0 | ... | 40 | 60 | 80 | 100 | 120 | 140 | 160 | 180 | 200 | 220
Subscribe to bilaterals.org weekly