UAE-Australia free trade pact likely this year
21-Feb-2006 Gulf News
A free trade agreement between the UAE and Australia is likely to be concluded by the middle of this year, said a top Australian official. The UAE is also likely to conclude another free trade agreement (FTA) with the United States, while the GCC is expected to sign its own FTA with the European Union in May.
US free traders retreat on UAE ports deal
19-Feb-2006 IPS
In a replay of congressional efforts last year that foiled a bid by a Chinese company to buy a US oil firm, a group of hawkish US lawmakers, citing national security concerns, are trying to block a deal that gives a major Arab company control over a British firm that runs some US ports.
UAE debate on benefits of FTA rekindled
14-Feb-2006 Middle East Times
After almost two years, negotiations between the United Arab Emirates (UAE) and the United States over a Free Trade Agreement (FTA) are nearing an end, with the two sides expected to close a deal within a few months. But the debate over the effect of the agreement on the UAE’s economy has recently been reignited.
UAE starts fourth round of FTA talks with US
1-Feb-2006 Bahrein Tribune
The UAE was following the lead set in the GCC by Bahrain yesterday when it started its fourth round of free trade agreement (FTA) negotiations with the US in London.
United States planning more free-trade negotiations in 2006
24-Jan-2006 Washington File
The Bush administration hopes to initiate more free-trade agreement (FTA) negotiations in 2006, possibly with South Korea and Malaysia, US Trade Representative Rob Portman says.
Investment opportunities will continue to increase in the UAE
12-Dec-2005
Investment opportunities will continue to increase in the UAE, according to the principal of one private Equity fund, who pointed to anticipated changes in the federal Company Law as further indication of the country’s liberal economy.
Morocco-UAE: What happened to the FTAs?
5-Dec-2005
Recent difficulties in the implementation of Morocco’s free trade agreement with the UAE have raised questions regarding the kingdom’s readiness for trade liberalisation. They might also further delay the entry into force of more crucial free trade deals.
UAE and US in third round FTA negotiations
10-Nov-2005 Asharq Awalsat
The UAE and US will resume their FTA negotiations on the 12 through the 16 of November in London.
UAE official: Double taxation deals paving the way for FTA’s
6-Nov-2005 MENAFN
According to a top UAE government official, double taxation agreements are paving the way for future free trade agreements and saving millions of dollars for of local companies.
Dubai free zones face regional competition
5-Nov-2005 Khaleej Times
Though many regional free zones have been around since the early 1980’s, only recently has the free zone frenzy emerged, coinciding with countries developing free trade agreements (FTA) with their neighbours and others wanting to become members of the WTO.
End of monopoly in food sector will benefit customers
4-Oct-2005 Gulf News
The UAE’s decision to eliminate the monopoly in the foodstuffs sector will have a profound impact on the economy, according to analysts and businessmen.
SA signs free trade pacts in Middle East
29-Sep-2005 Business Report
South African exporters will now have more access to Kuwait’s market after trade and industry minister Mandisi Mpahlwa yesterday signed a free trade agreement with the oil-rich Middle East country. The deal with Kuwait was concluded a day after Mpahlwa signed a free trade agreement with the United Arab Emirates (UAE), also an oil producer.
American Business Council welcomes FTA with US
22-Sep-2005 Khaleej Times
Welcoming the signing of the Free Trade Agreement between the US and the UAE, Anis Nassar, president of the American Business Council in Dubai said the move would help increase the economical potential of the Emirates.
Garment makers optimistic on liberalisation
8-Sep-2005
DUBAI’S textile and garments market is one of the largest and strongest markets in the region. In 2004, Dubai’s direct exports of the products reached Dh625 million, or 13 per cent of Dubai’s direct exports, while re-exports reached Dh6 billion; leading to a total share of 10 per cent to the total value of goods Dubai directly supplied to the rest of the world. 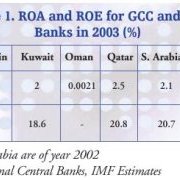 GCC banking sector liberalisation: FTA impact
9-Aug-2005 Khaleej Times
Recently, Free Trade Agreements (FTAs) negotiations are being held between the GCC countries and the USA. Being crucial sectors in these countries’ economies, the banking and financial sectors are being considered for liberalisation in the context of these FTAs.
NBD outlines major US objectives of FTAs
5-Aug-2005
National Bank of Dubai in a report outlined the US main objectives from regional trade agreements, the Free Trade Agreements (FTAs).
Australian PM holds FTA talks with United Arab Emirates
27-Jul-2005 ABC
Australian Prime Minister John Howard has held talks with officials from the United Arab Emirates on another Free Trade Agreement. The UAE has the world’s 3rd largest oil reserves.
Committee agrees on FTA elements
25-Jul-2005
In a meeting held recently at the Ministry of Finance and Industry (MoFI) in Dubai, the Rules of Origin National Committee agreed upon various elements including the official forms that will be adopted in the Free Trade Agreements (FTAs) that are currently under negotiation between the UAE and other countries.
FTA talks with US without domestic private sector termed not good - UAE
27-Jun-2005
Chairman of the Emirates Bank Group Ahmed Humaid Al Tayer has expressed disappointment about not involving the private sector in Free Trade Agreement (FTA) negotiations with the US, fearing it may turn out to be an ’agreement of mass destruction’ for the domestic economy.
UAE rejects GCC pact on free trade deals: Official
21-Jun-2005
Gulf Arab efforts to defend a customs union suffered a setback after the United Arab Emirates refused to sign an accord barring bilateral trade deals except with the United States, Gulf sources said yesterday.
0 | ... | 20 | 40 | 60 | 80 | 100 | 120 | 140 | 160 | 180 | 200
Subscribe to bilaterals.org weekly