Lubna calls on Japan to enter into FTA talks with the GCC
2-May-2005 Khaleej Times
Shaikha Lubna Al Qasimi, UAE Minister of Economy and Planning, yesterday urged Japan to enter into free trade negotiations with the GCC states so as to bolster its trade and investments ties with the region.
US eyes bilateral FTAs in Gulf
17-Apr-2005
With free trade agreements, come political leverage. Realising this, the United States is moving fast to sign bilateral FTAs with Gulf countries - in the hope that Washington would be able to fill a vacuum because of the slowness of these Arab states in starting any regional trading mechanisms of their own.
Azerbaijan plans FTA with UAE
7-Apr-2005
Azerbaijan is planning to sign a free trade agreement (FTA) with the UAE and the rest of the Gulf countries, a top Azerbaijani government official said yesterday.
US-UAE TIFA (2004)
5-Apr-2005
Businessmen air view on UAE’s FTA talks with US
4-Apr-2005
Representatives from the business and the academic segments have discussed the strong debated issue, the agreement, including real objectives behind it, probable local and regional advantages and disadvantages and the UAE’s readiness for signing such agreement.
UAE to only amend existing labour law
24-Mar-2005 Khaleej Times
Dr Khalid Mohammed Al Khazraji, UAE Under-Secretary of the Ministry of Labour and Social Affairs, denied reports that the country would be enacting a new labour law, stressing that the UAE Labour Law No. 8 of 1980 is undergoing several amendments. He also denied any link between the amendments under way and proposals submitted by the US delegation in the context of the US-UAE FTA negotiations.
Speeding free trade
17-Mar-2005 Oxford Business Group
Washington wants to sign Free Trade Agreements with every country in the Middle East - North Africa region by 2013, to promote economic and political development in line with recommendations made by the 9/11 Commission.
Australia eyes free-trade deal with UAE as ’launchpad’ for access to Middle East
17-Mar-2005 Daily Star
Australia and the United Arab Emirates agreed Tuesday to begin negotiations on a bilateral free-trade agreement (FTA) that Canberra said would be a "launchpad" for expanded business opportunities across the Middle East.
UAE and Australia begin talks on FTA
17-Mar-2005 Gulf News
The UAE and Australia are about to begin negotiations on a free trade agreement, officials said at a press conference yesterday.
Singapore, UAE ink economic cooperation pact, eye FTA
12-Mar-2005 Kyodo
Singapore and the United Arab Emirates signed Friday an economic, trade and technical cooperation pact that could lead to the launch of negotiations for a free trade deal between the two countries, Singapore’s Trade and Industry Ministry said Friday.
Gulf Emirate says there are no political strings attached to free trade talks with Washington
8-Mar-2005 Middle East Online
The United Arab Emirates said on Monday it was not committing itself to any changes in foreign policy by entering into talks on a free trade pact with the United States. The statement followed reports that Washington would ask Abu Dhabi to drop a trade boycott of Israel during the negotiations, which kick off here on Tuesday.
Crashing the third party
3-Mar-2005 O’Dwyer’s PR Daily
What do the Council on Foreign Relations, American Enterprise Institute, Center for Strategic and International Studies, Brookings Institution, and the Johns Hopkins School for Advanced International Studies have in common?
Central Bank discusses US FTA negotiation strategy - UAE
3-Mar-2005
Though the negotiations for a free trade agreement (FTA) between the UAE and the United States will take place from March 8, the banking and financial sectors has told the Central Bank of the UAE about its desire for more liberalisation.
UAE-US FTA talks slated in capital
12-Feb-2005
The free trade agreement (FTA) negotiation council aims to properly oversee ongoing preparation for the first round of official UAE-US FTA negotiations, due to take place in Abu Dhabi next month, said Dr. Mohammed Khalfan bin Kharbash, UAE Minister of State for Financial and Industrial Affairs.
UAE is analysing impact of free trade agreement
20-Jan-2005 MENAFN
The United Arab Emirates Ministry of Finance and Industry has contracted an international consultancy firm, Maxwell Stamp, to undertake an impact analysis of the effects a US-UAE Free Trade Agreement (FTA) on the local economy.
UAE, Oman must make new move for FTA, says US
17-Jan-2005 Khaleej Times
The United Arab Emirates and Oman must make new efforts to qualify for proposed free trade pacts with the United States, a US official said on Friday in response to objections raised by labour groups. 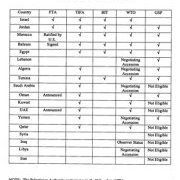 US announces intent to negotiate FTAs with UAE and Oman
16-Nov-2004 USTR
US Trade Representative Robert B. Zoellick today announced the Administration’s intent to negotiate Free Trade Agreements with the United Arab Emirates (UAE) and Oman.
’Change in labour law must for UAE-US FTA’
16-Oct-2004 Khaleej Times
UAE will have to change its labour code to meet international labour laws, revise the agency law and investment / sponsorship rules in order to sign a Free Trade Agreement (FTA) with the US, according to US Trade Representative Robert Zoellick.
UAE, US move towards FTA
8-Oct-2004 Khaleej Times
The United Arab Emirates and US made significant progress towards a Free Trade Agreement on Wednesday, paving the way for negotiations to start in the near future.
UAE upbeat on trade pact with US
4-Oct-2004 Gulf News
The UAE is ready to enter negotiations with the United States for a full-fledged free trade agreement that would dramatically boost trade and the flow of investment between both countries.
0 | ... | 20 | 40 | 60 | 80 | 100 | 120 | 140 | 160 | 180 | 200
Subscribe to bilaterals.org weekly