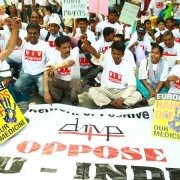 EU-India free trade deal will undermine India’s development
9-Dec-2022 Forum for Trade Justice
Ongoing FTA negotiations will adversely impact farmers, fishers, patients, traders and impinge on a progressive digital industrialisation strategy.
India-EU FTA: Stock-taking meet to follow third round of talks next week
23-Nov-2022 The Hindu BusinessLine
Market access for key items, government procurement, IPR, digital trade, data secure status, labour, environment to be areas of focus
India and European Union discuss Free Trade Agreement, price cap on Russian oil
22-Sep-2022 The Hindu
India and the European Commission are eager to "expedite" the dialogue for the Free Trade Agreement.
India-EU FTA talks to focus on digital trade, data security, sustainability: Sources
19-Jul-2022 Hindustan Times
Indian and European Union negotiators working on a free trade agreement are seeking to forge convergence on complex issues such as digital trade, data protection and sustainable development.
EU-India trade talks: base them on values, says Parliament
8-Jul-2022 European Interest
EU Parliament states it welcomes the restart of talks on a trade agreement with India, and should happen only as long as European values and standards, including rule of law, democracy, as well as human, women’s and labour rights, are respected.
India, EU resume negotiations for free trade pact
28-Jun-2022 Outlook
India and the European Union resumed negotiations, after a gap of over eight years, for a comprehensive free trade agreement.
India-EU FTA negotiations – how deep can we go?
27-Jun-2022 The Economic Times
While India and EU have set the ambition to conclude a comprehensive agreement, it must be acknowledged that there are fundamental differences in the design, or the template of the trade agreements signed by India and the EU so far.
0 | 10 | 20 | 30 | 40 | 50 | 60 | 70 | 80 | ... | 500